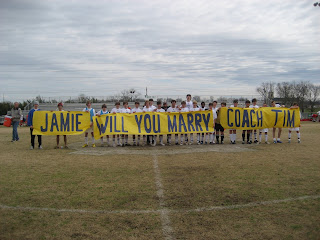 Friday night, the boys played 6A Wetumpka High School. The boys took a commanding 5-0 lead on 3 goals by Colin Newmeyer and one each by Troy Maxwell and Adam Hempen. Wetumpka managed to score 2 goals late in the second half for a final score of Catholic 5 Wetumpka 2.

To add to the excitement of the evening at halftime, our Head Coach Tim McCormack ’03, proposed to his girlfriend Jamie at midfield. Jamie thought she was going to take a team photo only to find the team holding up a banner asking her if she would marry Coach Tim. The photo above is a picture of the teaming holding the banner Friday night. Luckily for Tim, Jamie said yes!

On Saturday morning, the boys took to the field to battle 5A Valley High School. The Knights went down 0-2 early in the first half before Colin Newmeyer was able to find the net to bring the score to 1-2. Valley however responded with another goal to take a 1-3 lead into halftime. After an “inspirational” speech by assistant coach Dan McCormack ’96, the boys came out fired up the 2nd half to score 4 goals and win 5-3. Colin Newmeyer added 2 more goals in the second half to give him 3 for the game, his third hat-trick in 3 straight games. Also scoring goals were Adam Hempen and Justin Hughes.

Saturday evening, Catholic took on 5A Eufaula High School to determine who would win the tournament. The Knights came out strong and controlled the match from start to finish. The defensive back four of Brad Kondrack, Matt Clarke, Joey Kimminau, and Nick Moussalli along with goal keeper Greg Rhodes shut down a strong Eufaula attack. The Knights took a 3-0 lead on goals by Adam Hempen, Justin Hughes and Colin Newmeyer before conceding a goal with one minute left to play.

The Catholic players named to the All Tournament Team were Troy Maxwell, Brad Kondrack, and Greg Rhodes. Colin Newmeyer was named the Tournament MVP.

The Knights move to 5-0-0 on the season and will take on Robert E Lee on Wednesday February 28th.