We are the oldest continuous non-public K-12 school in the state of Alabama. The Sisters of Loretto, an order of nuns from Kentucky, arrived to Montgomery in 1873 at the request of Bishop Quinlan of Mobile. They purchased the Gerald Mansion (see below, circa 1930) and founded St. Mary of Loretto School for girls. The opening of the school was delayed until October of that first year because of a yellow fever epidemic, but the sisters cared for the sick in such a generous way they instantly earned respect and admiration in the city.

As the population grew and changed, the building was renovated several times by the hands of parents, parishioners and young alumni. In 1890, a new academy building was added to the property to relieve overcrowding and accommodate commercial courses. In 1929, at the request of St. Peter’s parish, St. Mary’s went co-ed and again re-arranged its facility. St. Mary’s Mothers Club took on the next capital fundraising project, adding the “little red schoolhouse” in 1938.

A 1944 restoration drive slowed the deterioration of the main campus buildings until 1952, when grades 7-12 moved to the new building on Adams Avenue, this time funded by St. Peter’s, St. Andrew’s and St. Bede’s parishes, along with many individual donors. The high school was renamed to “Montgomery Catholic High.” The grade school could not handle any more expansion, so a new “St. Bede Elementary” school opened its first classes in 1956 to relieve overcrowding. There was now room for many of the 200 Catholic children who had been previously turned away.

By 1962, the original Gerald mansion was condemned. The last of the elementary students were transferred to Our Lady Queen of Mercy School. Meanwhile, a committee began searching for a larger home for the high school, which was land-locked behind St. Peter’s. Father Powell led another building campaign and moved the school to its present location on Vaughn Road in 1965.  At the time 5350 Vaughn Road was little more than a cow pasture beyond the outer eastern limits of the city, but the Sisters, parents, teachers, and students quickly made it their new home.

Interim years saw the addition of the school gymnasium and athletic fields, rooms were air-conditioned,  walls were moved and walkways covered.

Throughout our history, we have been blessed in Montgomery with visionary leadership. In 1987, then principal Dr. Thomas Doyle convened a committee of parents to study the needs of Catholic education in Montgomery. After a full year of study, including surveys of parishioners all around Montgomery, the conclusion was our educational system needed a middle school, adjacent to the high school, but separate from it in terms of program and philosophy. To bring that idea to fruition, all pastors, principals and school boards in the Montgomery metro area, both on the east and west sides of town, were invited to a meeting in the high school cafeteria to discuss whether they wanted to join a regional Board—the purpose of which would be plan a middle school together, as well as address other areas of mutual concern–a change from the parochial model, with each institution sinking or swimming on its own. At a meeting in April 1990, each Catholic school in Montgomery,  with its pastor, principal and the members of its board, voted either to join this regional board or to pursue things on their own. Queen of Mercy, Catholic and St. Bede voted to regionalize under this Board, whereas St. Jude, Resurrection and then St. John’s, because of their historically different missions, voted to pursue a separate but parallel path within their school communities. This marked the beginning of what was then called the “Unified Board”.

The highest priority for this Board early on, then, was to build a middle school to serve our 7th and 8th grades. After some delay based on the promise of land that never materialized, the Board put into action a 5 phased capital improvement plan for the existing Vaughn Road location which was approved by the bishop in 1995. The Board reasoned that in order to build a middle school, we had to solve some infrastructure problems first, recognizing that we needed a bigger library, more parking, more science labs and better, more extensive athletic facilities to handle the additional 150-200 students a middle school would bring. A capital campaign was conducted in 1996-97. We raised about 2 million dollars, and we used this to complete the Belke center in 1998, named after Sister Martha Belke, who taught Physical Science in our school for 35 years and the last of 117 Sisters of Loretto to teach in our school. Sister Martha (to the right) accepted the award humbly.

In Phase II, we tackled the issue of athletic fields. This was funded primarily by an alumni campaign in 2001, just five years later. Through these funds, we were able to add a magnificent new football/soccer stadium, baseball field, softball field, practice field, and concession stand. Marking the entrance to our facility is our MCPS gate.

As an adjunct to this phase, we were able to significantly upgrade our gymnasium, with new bleachers, new windows, new tile floors in the foyers, a renovated concession area, and an expanded front lobby area. Most of these improvements were completed by our very active Booster Club.

In the Fall of 2004, we opened the middle school (phase III) for grades 7-8, changing the structure of our K-8 elementary schools into K-6 schools. The middle school has 8 classrooms, a band room which has allowed us to begin a band program (for both middle and high school students), bathrooms and central offices. Appropriately enough, it was named after Dr. Thomas Doyle, who conceived of the middle school years earlier and who served honorably in our high school from 1973 until 2001 as both its principal and president.

Dating back to the Baltimore Councils in the late 1800s,  which stated that there should be a “Catholic school in every parish”,  Catholic education has been essentially parochial. This model has served our Church well; coupled with the heroic commitment of the nuns, Catholic schools thrived, helping hundreds of thousands of immigrants and others rise to become productive, middle-class citizens.

But as successful as this model has been, the Unified Board recognized that the parochial model was not sustainable in Montgomery if Catholic education was to flourish in the 21st century. There were five reasons why:

1) First, the nuns were gone, replaced by lay teachers, putting pressure on the schools to raise tuitions to pay them livable wages. Catholic schools could not remain viable as the cheapest private school education in town;

2) Demographic changes were putting pressure on schools to move and to close. Schools once serving thriving, middle-class neighborhoods were no longer doing so.

3) Competition among K-12 private schools has increased dramatically. In the Montgomery metro area,  there are 31 private and parochial schools to choose from! In addition,  magnet public schools have proved an attractive option to many families.

4) The traditional configuration of our schools as K-8 elementaries (usually located on parish grounds) and 9-12 high schools (somewhere else) isn’t a competitive model matched against the K-12 private school. K-8 schools are rarely able to offer their students a true middle school program, with a separate schedule, structure, and administration that targets the needs of young adolescents. As a result, older students in K-8 schools typically feel “babied”. Furthermore, without sharing space with the high school, K-8 schools usually can’t give their students access to first-rate athletic facilities, music programs, libraries, or well-equipped science labs.

5) Regrettably, our society’s cultural values have changed. Social class often now defines us more than our faith. The once primary goal of Catholic parents to raise their children in the faith as THE reason to send kids to Catholic schools doesn’t rank as highly. Often what parents want from faith-based schools amounts to good manners. Manners can be taught just as well, perhaps even better, at elite privates or evangelical Christian schools, which typically do not minister to as diverse a student body.

For these reasons, the Unified Board proposed to the Archbishop an idea common to the business world but much less common in Catholic schools: regionalizing our school. In 2001, Archbishop Lipscomb approved the merger of St. Bede, the Middle School and High School, all previously operating as “stand-alone” schools, into one K-12 school, “Montgomery Catholic Preparatory School”, led by a Board and president.  Though each “campus” of MCPS had its own principal, advisory council and unique curriculum, all financial operations and budgeting now came under the auspices of the president and all policy-making for the school was set by the Board.

The results of this regionalization,  coupled with the extensive capital improvements begun in 1998, were very encouraging: The middle school peaked at a maximum enrollment of 200 students, pumping 90-100 students each year into the high school and even creating spikes in admission at St. Bede, since entrance to our middle school is only guaranteed if students successfully complete our 6th grade program. Overall enrollment grew almost 20% in two years,  which required us to move toward phase IV in our five-phased plan. We needed more classrooms! Accordingly, in 2006 the Board approved a 3 million dollar capital drive to build a new cafeteria, converting our old cafeteria into classroom space (Miles Hall), as well as to make needed infrastructure improvements at our St. Bede campus. The new cafeteria, The Dolly Barranco Activity Center, and Miles Hall were dedicated in the Fall of 2008.

In addition to the regionalization of our schools into “MCPS”, the Board also authorized an extensive study of Catholic education in Montgomery which entailed interviewing Catholic families whose children did not attend our school, small group meetings of our existing families, and extensive demographic analysis.

Building on Faith, Family & Tradition raised over $3.5 million in the eleven months after the campaign began. The afternoon of Sunday, August 11 marked the public unveiling of the first phase of the capital campaign: the dedication of the new gym facility. It was standing room only as faculty, students, families, alumni, and supporters of Montgomery Catholic Preparatory School gathered inside it for the first time. While the temperatures outside approached 100 degrees, the first impression the crowds received of the building was the blast of cold air as they entered. The 33,000 square foot athletics facility replaced the Father Pat Delahunty Memorial Gymnasium, a building that has hosted countless ball games, pep rallies, and other school events in its 51-year history. And while the Fr. Delahunty Gym has faithfully served the school during this time, Montgomery Catholic has outgrown its capacity for the gym to house the various athletics teams and the fans who come to support them.

At the heart of the new building is the Partners In Catholic Education (PICE) Knights Arena, which features two regulation-sized basketball courts and seating for over 850 spectators. The large arena floorplan allows for practices for multiple teams and sports to be held concurrently. There are locker rooms for both boys and girls, a state-of-the-art weight training and conditioning center, an on-site athletic training room, and a fully-equipped concession stand. Additionally, the building features offices for coaching staff, a multi-purpose area for reviewing sports film, a large meeting room, and hosting space for various school events.

The second phase of Building on Faith, Family & Tradition saw the conversion of the Fr. Delahunty Gym into a climate-controlled fine and performing arts building that houses the band, choral, and drama departments. The renovated building has classrooms for band and chorus, individual practice rooms, instrument storage, and offices for staff. There is also a student center that will serve as a gathering space to facilitate club meetings and other activities. The building was opened in February 2020.

In the fall of 2021, the introduction of the K3 program at both elementary campuses expanded Montgomery Catholic curriculum to a K3-12 program.

Montgomery Catholic continues to look toward the future of the school. We are thankful for the support of our friends, families, and the Montgomery community.
Menu 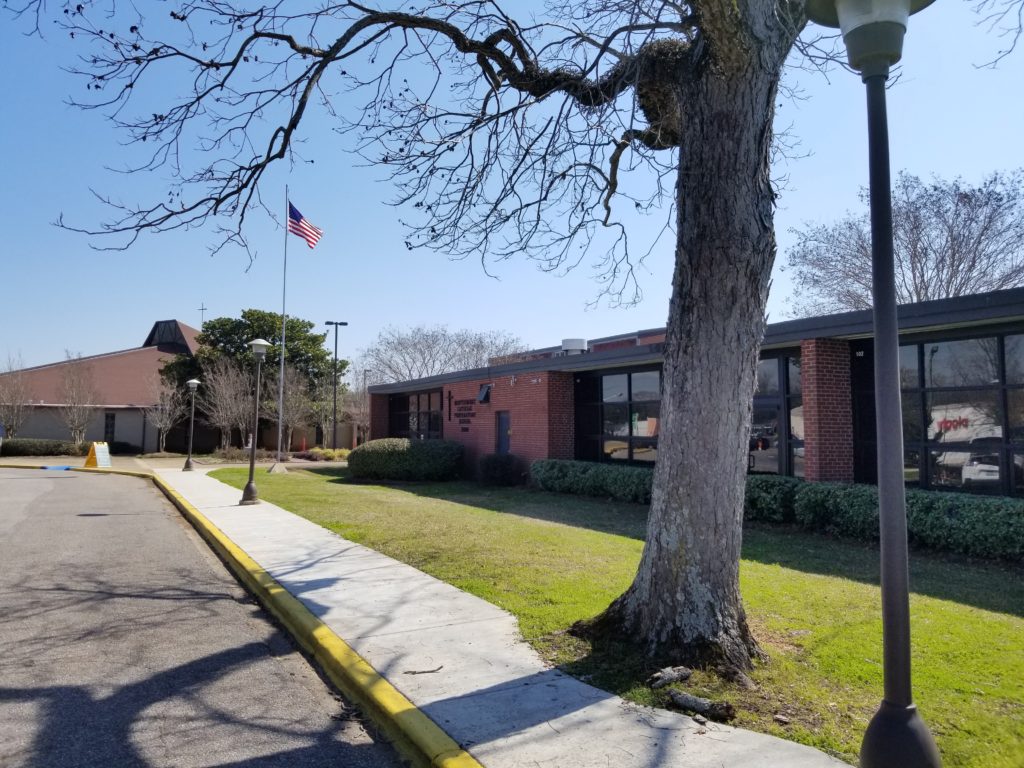