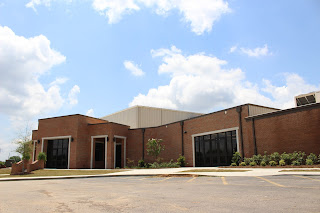 The afternoon of Sunday, August 11 marked the public unveiling of the first phase of Montgomery Catholic’s capital campaign, Building on Faith, Family & Tradition. It was standing room only as faculty, students, families, alumni, and supporters of Montgomery Catholic Preparatory School gathered inside the new gym facility for the first time. While the temperatures outside approached 100 degrees, the first impression the crowds received of the building was the blast of cold air as they entered.

“This is marvelous, this is wonderful, and our students are very fortunate,” said Gwendolyn P. Byrd, Executive Director, Department of Catholic Education, and Superintendent of Schools of the Archdiocese of Mobile. “All I can say is that everyone will treasure this facility. God made this happen.” 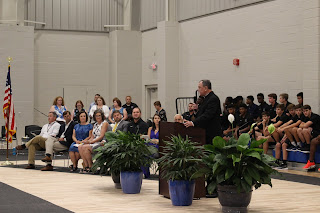 The 33,000 square foot athletics facility replaces the Father Pat Delahunty Memorial Gymnasium, a building that has hosted countless ball games, pep rallies, and other school events in its 51-year history. And while the Fr. Delahunty Gym has faithfully served the school during this time, Montgomery Catholic has outgrown its capacity for the gym to house the various athletics teams and the fans who come to support them.

At the heart of the new building is the Partners In Catholic Education (PICE) Knights Arena, which features two regulation-sized basketball courts and seating for over 850 spectators. The large arena floorplan will allow for practices for multiple teams and sports to be held concurrently. There are locker rooms for both boys and girls, a state-of-the-art weight training and conditioning center, an on-site athletic training room, and a fully-equipped concession stand. Additionally, the building features offices for coaching staff, a multi-purpose area for reviewing sports film, a large meeting room, and hosting space for various school events.

In her opening remarks, Montgomery Catholic President Anne Ceasar acknowledged that the school had needed a larger facility for a long time. In 2014, strategic planning led by the Institute of School and Parish Development confirmed this need, plus the need to grow the arts programs. After initiating a capital campaign in 2016, groundbreaking for the new gym took place on October 10, 2017.
“Thank you for allowing the Holy Spirit to work through you,” said Mrs. Ceasar, addressing all in attendance. She credited the prayers and financial support of the entire community for bringing the dream to reality, and expressed her gratitude for the help of a few key people in the building project, especially MCPS Project Director Nap Barranco.

“Many worked hard to bring this dream to fruition, but none harder than Nap Barranco.” She then said, addressing him directly, “Your knowledge, attention to detail, and dedication is priceless.”
Most Reverend Thomas J. Rodi, Archbishop of Mobile, led the dedication and blessed the new building. In a moving ceremony, he reiterated that the building was made possible through the prayers and generosity of the entire Montgomery Catholic community.

“I would like to only add one more name to the list of names that were already mentioned, and that is Mrs. Anne Ceasar,” said Archbishop Rodi. In an emotional moment, he presented her with a plaque stating, “In grateful appreciation to Anne Ceasar, President of Montgomery Catholic, for her vision and leadership in the building of this facility.”

“This project would have been impossible without the help of everyone in the community,” said Athletic Director Daniel Veres. “I don’t think we’ve ever had this many people gathered in one place at one time.”

Building on Faith, Family & Tradition raised over $3.5 million in the eleven months after the campaign began. The second phase sees the conversion of the Fr. Delahunty Gym into a climate-controlled fine and performing arts building that will house the band, choral, and drama departments. The renovated building will have classrooms for band and chorus, individual practice rooms, instrument storage, and offices for staff. There will also be a student center which will serve as a gathering space to facilitate club meetings and other activities. Renovation on this new space is ongoing; completion is estimated to be winter of 2019.

Founded in 1873, by the Sisters of Loretto Montgomery Catholic Preparatory school celebrates 146 years of Catholic education in Montgomery this year. Founded as an all girl’s school, St. Mary of Loretto became co-educational in 1929. The high school moved to its current location in 1965. The last expansion at the campus was in 2007 with the addition of the Dolly Barranco Student Activity Center and Cafeteria. Today, Montgomery Catholic Preparatory School is a K4-12 college preparatory program across four campuses in Montgomery.