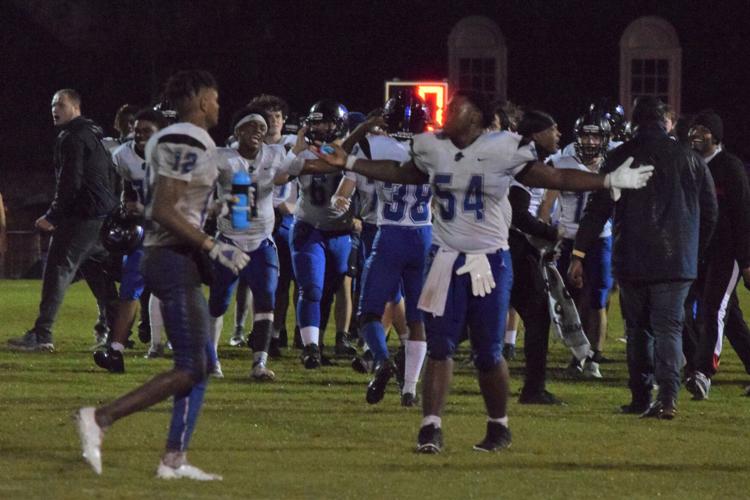 It doesn’t take long to chart the progression of Catholic football.

In 1989, Jeff Clark coached the Knights to the Class 2A semifinals, rolling off a string of five wins to open the season, including a 34-7 victory over first-year coach Randy Ragsdale. The Knights would lose close games to Montgomery Academy, just two years removed from winning the 1A state title, and to Autaugaville, which was on its way to the 1A semifinals, but easily established themselves as the best team in Catholic history.

Over the next 26 years, Catholic would make just three trips to the state playoffs (losing by an average score of 41-16) and post four winning seasons. When Aubrey Blackwell took over as head coach in 2015, he was facing a daunting task of building a winner from an organization that had won just 19 games in the prior six seasons. He’s still got one more game left to play, but Catholic will be playing for a state championship on Thursday just five years after transforming itself from a perennial doormat to a perennial championship contender.

“I’m proud of our guys for doing something that people told me I could never do here,” Blackwell said after beating previously undefeated Montgomery Academy in overtime of the 3A regionals.

Granted, the landscape has changed dramatically since Clark’s days and Blackwell has a ton of weapons at his disposal that no previous Catholic football coach could ever dream of, but even talent isn’t enough until the culture of winning has been established.

Catholic went 4-6 in Blackwell’s first year in 2015 and 8-3 in 2016, losing to Thomasville 20-6 in the first round of the playoffs. By 2017, the Knights would win a region championship and be considered one of the area’s best, only to lose to perennial power UMS-Wright in the second round.

Another second-round loss in 2018, this one to American Christian, was followed by a 21-0 quarterfinal loss at UMS-Wright in 2019. The Knights could rank as one of the area’s top teams, but what would it take to make the next step and be considered one of the state’s best?

“I was one of the ones that was thinking we might only play six or seven games and that COVID would end all football,” Blackwell said. “So it was kind of a blessing in disguise that the season turned out like it did.”

A record-setting Catholic team went 12-0 in 2019, only to be shut out by UMS-Wright in dominating fashion. Losing spring football practice because of coronavirus as well as the opportunity to break in a new quarterback in seven-on-seven drills over the summer had to leave the Knights with some questions entering the 2020 season.

“I feel like there were a lot of questions at the beginning of the season until we got to the playoffs and to the third round, in the same position we were in last year,” junior linebacker TJ. Dudley said. “Last year we had questions about whether we were even good enough to beat that team, but this year it felt like another game on the road and everybody was prepared for it and used to it and everybody came to play.”The Knights lost the season opener to 5A Pike Road and midway through the season to unbeaten Montgomery Academy, then hit the playoffs on a high note by taking out Bayside Academy (52-21) and Opp (38-0) with early domination, then winning at Thomasville 25-15.

In four playoff wins, Blackwell doubled the number of playoff wins he had at Catholic and the six-year coach now accounts for eight of the Knights’ 11 playoff wins in its history (with Clark winning the other three).

The Knights have arrived.

“I did expect this group of seniors to do something special, I just didn’t know what it was,” Blackwell said. “This group really turned the corner the last two weeks of the regular season. Going into the week of the Trinity game, they learned how to practice a certain way. They’ve practiced that way since that game and it’s paying off for them. Their preparation has been the reason they’re having the success the second half of the season.”

The quarterback, freshman Caleb McCreary, has thrown for 2,838 yards and 34 touchdowns, with much of that going to senior receivers Myles Butler (1258 yards and 12 touchdowns) and DJ Carter (1153 yards and 14 touchdowns). In the backfield, Jeremiah Cobb has rushed for 1,912 yards and 18 touchdowns.

Defensively, the Knights are led by their two outside-turned-inside linebackers, Pat Ryan (148 tackles) and Dudley (112 tackles).

They’ll need their best effort on Thursday morning against Fyffe, a team that played in five of the last six 2A championship games before moving up to 3A this fall and promptly going 14-0. The Red Devils enter the contest with a 44-game winning streak and a 14-game playoff winning streak.

Of course, being the underdog doesn’t faze the Knights.

“We like being the underdog,” Dudley said. “Actually, I think we’ve been the underdog in every playoff game we’ve played. They counted us losing it and we took that as motivation and will take that motivation into the game.”