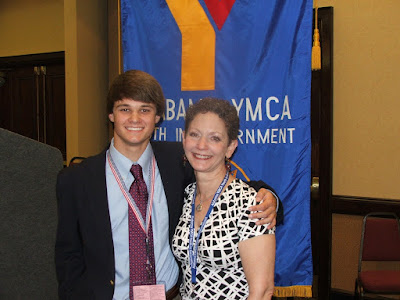 My first involvement with the YMCA Youth in Government was in the eighth grade through the Jr. Youth Legislature conference, which offers middle school students a glimpse of the high school Youth Legislature. This experience was all that I needed to become hooked on Youth in Government.
Four years later, I have remained actively involved in the Youth Judicial and Youth Legislature conferences. I am currently serving as the 61st Youth Governor of Alabama for one of the best programs, in my opinion, the YMCA provides to the youth and future of the state of Alabama.
The Youth Judicial conference is a mock trial competition in which students participate as attorneys and witnesses trying their case in real courtrooms against other teams before students judges. The teams are scored for their performances, and as the conference continues, the field is narrowed down to the top ten prosecution/plaintiff and defense teams. The conference culminates in the final trial presided by the chief justice where the top prosecution/plaintiff and defense teams try their case before the entire conference. Over the course of the conference, you can see a drastic improvement in the delegates and their performance and understanding of the American Judicial System.
In the Spring, the Youth Legislature convenes where students draft and debate legislation and actively participate in learning how the legislative process works. Delegates are able to follow the journey of legislation becoming law through their own bills, or they can learn how to become involved and play an active role in government outside the State House and Senate chambers as lobbyists or as members of the press corp, an aspect of the program which I feel is very important and would like to see expand to include broadcast journalism.
“Youth Leg” is a very exciting time with delegates full of energy: the Embassy Suites hotel is covered with campaign signs and banners. At the end of the day, everyone has made new friends from across the state and discuss the upcoming elections and what happened that day in chambers with them. The Youth Legislature conference concludes with the election of the new Youth Governor and the selection of outstanding delegates to represent the state of Alabama at the Conference of National Affairs.
At the YMCA Conference on National Affairs, young people representing the respective state Youth in Government programs gather at Black Mountain, North Carolina, to draft, research, and debate issues of national or international importance. The delegates reflect many different regional, ethnic, cultural, socioeconomic, and ideological backgrounds which spurs debate by allowing every side of an issue to be represented and every one’s voice to be heard.
By representing the premiere delegation at the conference, members of the “Family of Alabama” are able to show their state pride through both their performance during debate and their interactions with others outside of chambers while imparting a little Southern hospitality to everyone they meet. I will be forever indebted to the YMCA for the many opportunities, tools, and intangible lessons I have learned through my experiences in the Youth in Government program.
In addition to learning about government, the Youth in Government program has taught me to challenge myself and work hard to serve others, win with humility, and lose with grace; to understand the importance of diversity in society; and to develop better leadership skills and self-confidence by placing myself in an environment that can allow me to succeed. This experience has allowed me to create new friendships and strengthen old bonds that will last a lifetime.
Sometimes I look back at my experience as an eighth grader in a sport coat wearing a tie (that was a bit too long) walking up to the table in the statehouse to register for Jr. Youth Leg. I think about how glad I am that I became involved in a program that allows me to both learn and grow so much as an individual.
Pictured: Alabama’s Youth Governor and Montgomery Catholic senior Roscoe Anderson with Montgomery Catholic Government Club sponsor Mrs. Amy Johnson.