Williamson, Esmont Receive Knights of the Round Table Award 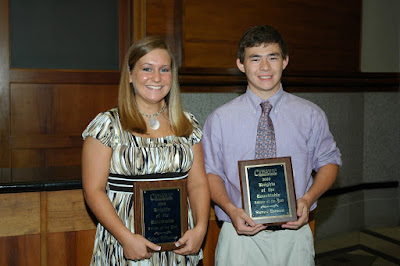 Kelsey Williamson and Steven Esmont have been honored by the Montgomery Catholic Athletic Booster Club, which named them the 2009 Knights of the Roundtable Award winners.

The Knights of the Roundtable Awards, given annually to the most well-rounded female and male senior athletes, were presented at Montgomery Catholic’s varsity sports banquet held May 11 at the RSA Activities Center in downtown Montgomery.

Both Williamson and Esmont were multi-sport athletes, playing on varsity teams since the seventh grade.

Williamson played varsity softball, volleyball and basketball while at Catholic. She lettered for five years on the Lady Knights’ softball team before a knee injury during her senior basketball season shortened her career.

She won individual sports awards in every sport she played, including the Jack Kresek Coaches Award twice and the Fr. Pat Delahunty Sportsmanship Award twice. She was also selected a team captain. She participated in numerous community service and church activities and graduated with a 3.542 GPA.

“I have learned the importance of each individual player coming together as a team to accomplish a goal,” wrote Williamson in her Knights of the Roundtable nomination form. “I have been led to set new goals in life with the knowledge that it takes hard work and dedication to achieve them.”

He also earned the Jack Kresek Coaches Award in one of his sports. He was twice an all-tournament selection in the Jason Armstrong/FCA baseball tournament and has been named to multiple baseball all-star teams. He too has participated in numerous community service activities.

Of his experience as an athlete at Catholic, Esmont wrote in his nomination form, “It has taught me sportsmanship, leadership, and most importantly it has taught me that it is okay to have God as part of your team … I have learned to take pride in my school and I just hope somewhere along the lines, I have taught at least one person to do the same.”

To be nominated, an athlete must have participated in at least two sports during their senior year. Nominations are made by the coaches at Montgomery Catholic and a five-person committee appointed by the booster club reviews the information submitted by each nominee in order to determine the winners.

Winners in 2008 were Meridith Anile and Alex V. Taylor.