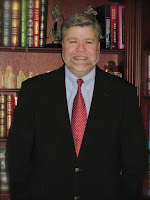 Faustin N. Weber, president of Montgomery Catholic Preparatory School, has been selected as the new headmaster for Pope John Paul II High School in Hendersonville, Tennessee, for the 2008-2009 academic year. Mr. Weber will officially assume the position in late June.

In explaining his decision, Mr. Weber said, “God has blessed our recent capital development work and regionalization efforts, and the results are that enrollment has surged from 640 to 800 in less than five years. Increasingly, my job as president has become that of the chief financial officer of the institution–a responsibility I welcome, but at the same time, I yearn for closer relationships with families and students more typical of the principal position.”

He continued, “When Mrs. Vaughn announced her resignation at the end of this year, I saw an opportunity to merge the president and principal position for a time, and proposed to the Board that we do so, coupled with hiring a business manager to assist me as president and an assistant principal to assist me as principal. The committee studying this proposal, however, worried with some justification that the short term issues as principal would trump the long term planning of president and believed that combining might threaten the recent trajectory of success we’ve enjoyed under the distinct president-principal model. Recognizing their concern, I began to look for other positions around the country that incorporated a hybrid leadership model, which is what led me to the headmaster position at John Paul II.”

Mr. Weber’s 23-year career at Montgomery Catholic began in the fall of 1985 as a Theology and English teacher, after completing his Master’s degree from the University of Notre Dame.

From 1989 until 2002, he served as principal of Catholic High. In June of 2002, Mr. Weber was hired as the school president leading the merger of what is now Montgomery Catholic Preparatory School, a regional kindergarten through 12th grade school on two campuses.

Weber reflected on his four years of full time teaching, 13 years as principal and six as president.
“Montgomery Catholic has been a great blessing to me and to my family. I met my wife here when we were both first year teachers. We’ve raised our kids here, from kindergarten on up. My best friends are all connected to this place. Though I am excited about the new challenge, I love this place and am very proud of all that we’ve accomplished together as a community,” said Weber.

A president search committee has been formed, lead by the Board in conjunction with the Office of Catholic Schools.