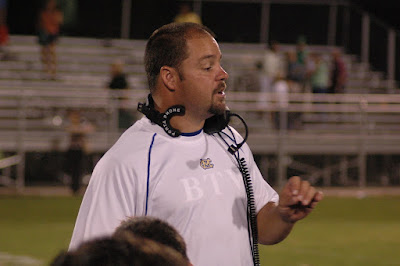 Trokey, who is completing his fifth year at Catholic, met with team members Wednesday afternoon to inform them of his decision.

Trokey led the Knights to two state playoff appearances in the past three seasons, including a 7-3 regular season mark in 2008 and a second-place region finish, the school’s first season in Class 4A.

“I want to thank Montgomery Catholic for the opportunity to be part of such a great school,” said Trokey. “I appreciate the parents who have given their support. And, most importantly, I want to thank the young men I’ve coached – their effort and hard work have led to the successes we’ve enjoyed.”

Trokey is returning to his alma mater, Nevada Union High School in Grass Valley, Calif., where he will be an offensive assistant.

“It has been my dream ever since I started coaching to one day go back to my old high school. Even though it is very difficult to leave these young men I care so much about, I feel I have reached a turning point in my life that makes this, in my heart, the right time to make this move,” said Trokey.

Trokey, an assistant at Alabama Christian Academy for seven years, came to Catholic in 2004, inheriting a football program that needed to be rebuilt. Progress came slowly but surely as the Knights went 4-6 in each of his first two seasons. However, the Knights’ improvement showed in 2006 when they went 6-5, making the Class 3A playoffs.

“Coach Trokey has done an outstanding job of leading our program over the past five years,” said Jim Tolbert, athletic director at Catholic.

“Tim came to Catholic and took ownership of the program. He believed Catholic football could be as good as any school we played and he helped our players and fans believe it too. He put 100 percent effort into helping our athletes improve on the field and off. He will be missed by the Catholic family.”

The process for hiring a new head football coach begins immediately. Information about the position has been posted on various coaching Web sites, including the AHSAA site. The school has appointed a five-person search committee to interview candidates and recommend a new coach.

Off-season football workouts will continue as planned under the direction of Catholic’s assistant coaches.