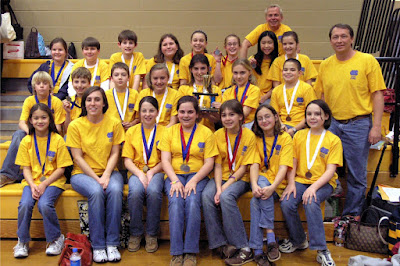 Saturday, February 23, all members of Montgomery Catholic Preparatory School’s St. Bede Science Olympiad team were up bright and early at 5:00 a.m. Why would any kids do that? Well, they do it because of their love for science. They began their day with the long 2½-hour drive to Jacksonville High School in Jacksonville, Alabama, to compete in the Elementary Science Olympiad competition.

When they reached their destination they were warmly greeted at the opening “ceremonies,” then sent off sleepily to their events. While there, they made paper helicopters, took tests on weather and wildlife, built bridges of pasta, and made many new friends.
Finishing this fun-filled day they received more first place medals than any of the other 18 schools competing at the Olympiad and took home the third place trophy! The team members are Sixth graders Tara Bourke, Ann Marie Dean, Clay Ronan, Ashley Barranco, Anna Mills, Maddie O’Mara, Alex Castanza, and Allie Micher. Fifth Graders Paige Barranco, Andrew Bomberg, Jacob Hulcher, Ashley Kim, Ashley Karst, Mandy Jones, Mary Janet McLaughlin, Lindsey Guin, and Sean Federspil, Fourth Graders Emily Barranco, Patrick O’Mara, Mary Reagan Starrett, and Marissa Dogan. Montgomery Catholic’s St. Bede Science Olympiad Team is sponsored by Mr. Nick Bourke, Mr. Larry Meiers, and Miss Heather Kirsch.
For fifteenth years, Jacksonville High School has sponsored an Elementary Science Olympiad, which is an academic interscholastic competition designed to increase student interest in science and improve the quality of science education. The Elementary Science Olympiad offers a unique opportunity for students to test their creative and cooperative skills, interact with other motivated students, and expand their minds with science.
Elementary Science Olympiad teams are comprised of up to 24 upper elementary students who compete in a series of individual and team events which participants prepare for prior to the tournament. The majority of Elementary Science Olympiad events are team competitions that require teamwork, group planning, and cooperation. The emphasis is on learning, participation, interaction, and having fun.