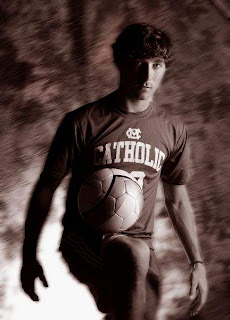 Newmeyer became just the fifth player in AHSAA history to score 100 career goals. Newmeyer scored 42 goals and had seven assists in 24 games this year and scored once every three times he shot the ball.
In doing so, he led the Knights to their first playoff trip in 10 years and nearly guided Catholic to a win in the playoffs as well.
He scored the team’s only goal in a 2-1 overtime loss to Bayside. By season’s end, he had racked up seven hat tricks (finishing with 16 in his career) and 115 total goals. Newmeyer, who will play for Tusculum College next year, was held scoreless in just five games.
More impressively, he racked up all the statistics and accolades while playing with a sports hernia. Newmeyer underwent surgery this past Monday and is currently suffering through a week of bedrest.
“I found out about it in the early winter and the doctor said it could have gotten worse, but it couldn’t be more painful than it already was,” Newmeyer said. Newmeyer said it wasn’t a tough decision to play his senior year — a season he had waited on since joining the Knights varsity team as a seventh grader.
Also named to the All-Metro Soccer team was Justin Hughes. Seniors Chancellor Maryland, Brennan Parker, and Greg Rhodes were named as Honorable Mention.
Rising sophomore Caitlin Sears was named as a forward to the All-Metro Girls Soccer team.
Rising senior Thomas Sutton was also named to the All-Metro Golf second team.
Rising sophomore Anissa Britt was named to the All-Metro 1A-4A Softball team. Rising freshman Jordan Fox earned Honorable Mention.
Rising senior Steven Esmont earned Honorable Mention for the All Metro 1A-4A Baseball team.
–The Montgomery Advertiser contributed to this story.
–Photo of Colin Newmeyer by David Bundy.