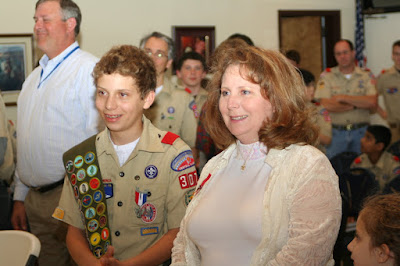 Montgomery Catholic eighth grade student AustinYost earned the designation of Eagle Scout during a Court-of-Honor ceremony conducted at Aldersgate United Methodist Church on Tuesday March 25, 2008, where he was formally recognized as an Eagle Scout by his Troop and given his Eagle Scout medal.
Austin began as a Tiger Cub Scout in 1st grade and earned the “Arrow of Light” award in Cub Scouts, the highest rank possible. He has been a Boy Scout since age 10 and earned the Eagle Scout rank last November at age 13, which is the Boy Scouts highest rank.
Only about 4% of all Boy Scouts reach the rank of Eagle Scout. The average age of a Boy Scout earning the rank of Eagle Scout is nearly 17 years old. It took great determination from Austin to reach Eagle at 13.
Austin Yost completed his Eagle Scout Leadership Service Project on Saturday Oct 13, 2007. The project consisted of 15 mobile benches to be used for the Pike Road Arts and Crafts Fair. Through fundraising efforts, Austin obtained the necessary finances for this project from the Pike Road Civic Club and the Pike Road Community Club.
The service project required approximately 200 man-hours to complete. This included planning, fundraising, developing design drawings, purchasing materials, cutting materials and assembly of benches. Austin had many volunteers including Scouts, Scout adult leaders, neighborhood friends and family to help with the project.
The benches seat a total of 75 people and really fill an important need for the Arts and Crafts Fair. In the past, there has been limited seating, so the benches will give fair-goers a nice place to rest their feet during lunch or when they view the popular Kelly Bartlett Conservancy’s Birds of Prey Show. Also, each bench has a different plaque mounted on it. These plaques represent the points of the Boy Scout Law such as – BE TRUSTWORTHY, BE LOYAL, BE HELPFUL, BE FRIENDLY, etc.
Austin Yost is the son of Glenn and Susan Yost.
Pictured: Montgomery Catholic’s Austin Yost and his mother, Susan Whatley Yost, at his Eagle Scout Court-of-Honor Ceremony.