General
November 12, 2016,  the exceptionally fine men and women of Montgomery Catholic Preparatory School went after the state cross country championships.  When the smoke had cleared, both teams had acquitted themselves exceptionally well and the girls’ team walked away as the state’s 4A runner-up! 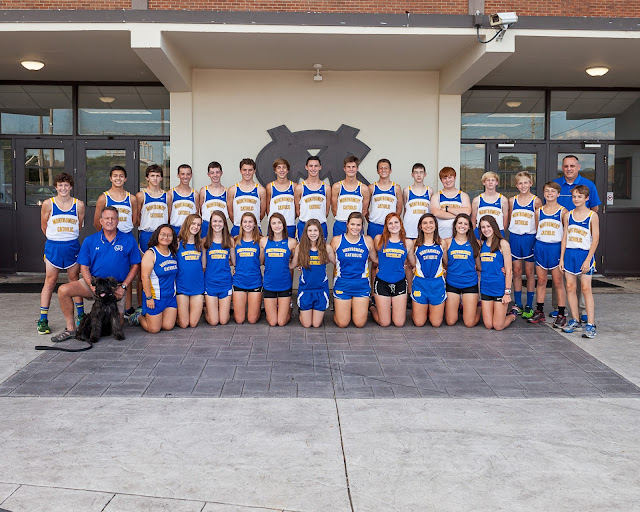 The Catholic girls were led by the incomparable Amaris Tyynismaa.  With virtually no one in proximity after 100 meters into the race, Amaris ran hard trying to push herself.  In the end she ran an excellent time and won her historic, third consecutive State Championship.  Isabelle Cochran, Catholic’s own, stepped into the race seeded far behind two runners from other schools.  When the smoke cleared, she almost pulled off second, earning her All-State honors with an awesome third place while leading the entire team with an unheard of forty second improvement over the 5k distance.  Katie Galvin ran 3rd for the Racing Knights, earning All-State honors with an overall 13th place off an excellent 12 second improvement.  Virginia Speirs finished as the Knight’s 8th runner in 98th with a superb 23 second improvement.  Annabelle Starrett ran her fastest time in the last two years and ran a season best by 16 seconds.  Katelyn Stark also competed hard despite a severely injured foot.

For the Catholic boys, Zach Kroeger ran like a thoroughbred unchecked and at one point was in 2d place during the highly competitive race.  Facing numerous challenges in the middle of the race, he finished strong in 10th place, earning All State honors having run 4 seconds faster than he ever ran before.  Grant Walker also earned All State honors with his 15th place effort.  Chris Valencia, Catholic’s #4, broke 18 minutes for the first time, pulling out a 15 second improvement.  Cam Searcy showed the boy’s best improvement of the meet, running his best race to date while dropping a full 30 seconds off his best time while running 5th for the team.  The Knight’s #8, Sam Leslie, also ran a personal best.  Finally, Joe Schmidt, despite running on a severely sprained ankle, just missed running a personal best while running in the #6 slot for Catholic.

Overall, a superb season for the Racing Knights, making their coaches Ed Wright, Hollis Johnson and Kevin Madden very proud of the effort and heart of the 2016 Catholic Cross Country Team.