Montgomery Catholic Preparatory School rising Senior, Maddie O’Mara attended the Women’s Technology Program at Massachusetts Institute of Technology (MIT) for a month this summer. She was one of only forty young women from across the country, and the only student from Alabama selected to attend WTP in Electrical Engineering and Computer Science. WTP is a summer academic and residential program for female high school students to explore engineering and computer science through hands-on classes, labs, and team-based projects in the summer after 11th grade. 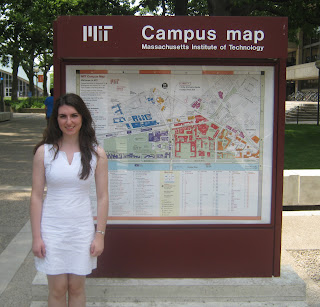 Maddie took three classes: Electrical Engineering, Computer Science, and Discrete Math, for the first three weeks, and the fourth week she participated in the WTP motor-building competition.  The competition required her to design and build a motor, finishing with a speed competition, in which Maddie placed 2nd, and won a digital multimeter.  Maddie explained what her days were like by saying, “I spent about seven hours in class everyday, and I had seven plus hours of homework every night.”  In the Electrical Engineering Course, she learned about Current and Voltage, Resistor Circuits, Kirchoff’s Laws, Capacitors, Waveforms, Inductors, Filters, Digital Abstraction, Logic Gates, Combinational Logic, Sequential Logic, Counters, VLSI and computer architecture, Signals and Systems, Robotics, Semiconductors, Fabrication, and did a clean room tour. The Computer Science Course focused on Programming where students learned the computer language Python, and were able to put the knowledge to use by building several computer programs, including Tetris, Tic Tac Toe, Blackjack, a program to tell if a deck of cards was “hot” or “cold”, a program to generate random integers, a program to change numbers into binary numbers, a program to iteratively generate the Fibonacci sequence and convert it to binary, and a program to calculate GPAs on a report card, along with several others.  The Discrete Math course covered topics including Binary Numbers, Boolean Logic, Logarithms and Exponents, Algorithms, Induction, Recurrence Relations, Graph Theory, NP-Completeness, Cryptography, Probability, Information Theory, the Friedman and Kasiski Tests, and Networking.  Maddie said of her summer adventure at MIT “It was very rigorous, but I really learned a lot!”

To learn more about the program visit http://wtp.mit.edu/eecs/index.html .

Maddie is the daughter of Col. and Mrs. Ray O’Mara of Montgomery, Alabama.

Welcome home Maddie! What a wonderful representative for Montgomery Catholic Preparatory School, our City, and the State of Alabama.