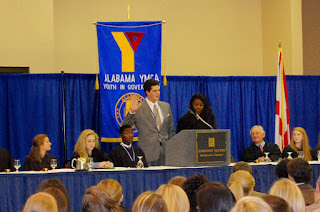 Montgomery Catholic Preparatory School junior Dominic Godwin was elected as Alabama’s 2011 Youth Supreme Court Chief Justice at the 2010 YMCA Youth in Government’s Youth Judicial Conference held at the Embassy Suites in downtown Montgomery. Of the job, Godwin said, “A chief justice should not only the be the head of the competition, but should also be there for the delegates.  I hope to spark each and every delegates’ enthusiasm by example and leadership.”

Election speeches were given on Saturday night of the conference with elections on Sunday night.  Godwin has been involved with Montgomery Catholic’s Government Club and the YMCA Youth in Government Programs for the past three years.  This election was his first run for office.  Godwin’s first official duty as Alabama’s 2011 Youth Chief Justice was to adjourn the 2010 Judicial Conference during the closing ceremony.  In the spring, Godwin will preside over the Supreme Court at the 2011 Youth Legislature Conference.  He will return to preside over the 2011 Youth Judicial Conference next fall.