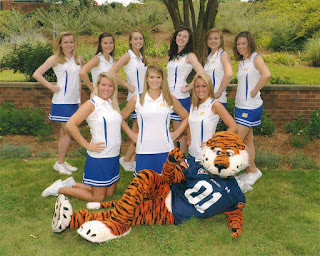 Founded in 1948 by L.R. Herkimer, NCA/NDA hosts camps, championships, and events for 150,000 cheerleaders and dancers each year.

As part of the 3-day camp curriculum, the National Cheerleaders Association selects award winners at each of the over 1,000 camps it administers around the world each summer. Awards are given for individual and team accomplishments.

Montgomery Catholic’s Varsity cheerleading squad received the 1st place trophy for the NCA Game Time competition Varsity Division and was named Top Team. They also earned a bid to NCA’s national competition in Dallas, Texas, earned the S.P.O.T Award for their outstanding commitment to spotting and stunt technique, earned all superior ribbons for Cheer and Mascot throughout the camp and earned the spirit stick each night of the camp.

Two Montgomery Catholic Varsity cheerleaders were selected to as All-American team members including Jessica Mount and Madison Roberts. Selection as an All-American is the most prestigious award in cheerleading today. Participants vying for All-American status are judged on motion technique, jumps, tumbling, spirit and enthusiasm, voice projection, and overall crowd appeal. These individuals are eligible to perform at various NCA Special Events.