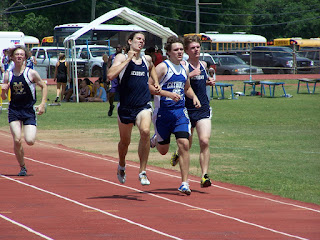 The girls team finish 17th out of 23 teams in the meet.

For the boys’ team, eighth-grader Wellington Westendorf was probably the youngest competitor in the javelin and threw a very respectable 114-09 to finish 16th.

Josh Glenboski ran a very nice 800 meters. His time of 2:11 was his best time this year. Especially impressive was the way he competed the entire race, passing guys throughout the second lap.

The boys 3200-meter relay team – Glenboski, A.J. Mayhan, Walker Catoe and Nolan Plate – put together an almost a perfect race. Since they were the fastest team in the slow heat, they had to win the heat in a fast time to have a chance of scoring.

Each one ran best or near-best times for the season. Glenboski led off with a very strong leg at 2:15. Mayhan was tough and kept the team in the front with a 2:21. Catoe had the best race of the day as he improved his personal best by almost 15 seconds with a 2:23. Plate ran a perfect anchor leg in 2:14 to bring the team home. The Knights won the heat, finishing 9th overall.

Congratulations to the Knights for a great meet and a successful season.