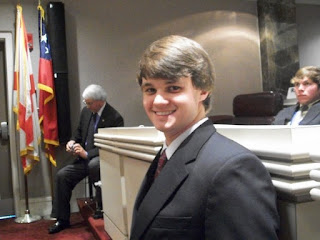 Members of the MCPS Government Club participated in the 61st Annual YMCA Alabama Youth Legislature Conference that was held on April 3 – 5, with our own Roscoe Anderson, Youth Governor, presiding over the events.

Many bills were brought before the House and Senate chambers for debate, and Governor Anderson actually signed 15 bills into law, including First Year Bill 36, written by Delegates Kevin Norris and Cameron Powell, requiring that all swimming pools in the State be enclosed by a 5-foot fence.

Each one of our students had a successful weekend, and several were recognized at the Awards Ceremony. Kevin Norris and Cameron Powell were given Outstanding Statesman awards. Others were honored by being invited to attend the Council on National Affairs (CONA) to be held this summer in Black Mountain, NC. Those invited include Roscoe Anderson, Austin Barranco, D’Jara Britton and Thomas Visco, who was awarded the Distinguished Service Award, which provides the recipient with free registration to CONA. D’Jara Britton, who mounted a successful campaign, was elected to serve next year as Lieutenant Governor.