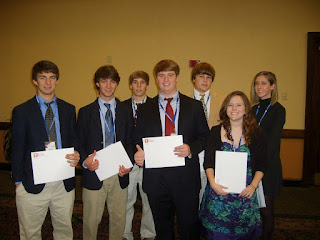 The team led by attorneys Brandon DuBois, Wallace Harvey and Aaron Weber with witnesses Lora Burke, John Dugan, Rebecca Hails and Thomas Sutton, were chosen as the top plaintiff team and tried the case again in the Final Trial on Monday morning. Although they did not win the verdict, however, they performed so well during the course of the weekend that they were chosen, as a team, to represent the State of Alabama at the National Mock Trial Competition to be held in May. In addition, Aaron Weber was named the top plaintiff attorney of the weekend.

The final act of the Youth Judicial program is always the announcement of the winner of the election for Youth Chief Justice of the Supreme Court.

This year the gavel has gone to D’Jara Britton, who will serve as Chief Justice at the 2009 competition.