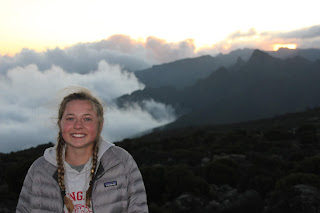 Summer vacation is always a great time to make new memories by traveling to new and exotic places. One Montgomery Catholic Preparatory School student took this to the literal extreme and hiked to the top of the world and summited Mount Kilimanjaro, 19,341 feet above sea level.

Montgomery Catholic senior Grace Scott packed a rucksack and traveled to Tanzania, East Africa, with youth mountaineering group, Moondance Adventures. An experienced mountaineer herself, Grace has hiked throughout the Blue Ridge Mountains, Yosemite National Park, and the Pyrenees Mountains between France and Spain, and has summited Mount Shasta in California and Mont Blanc in France. Her avid interest in the outdoors and love of serving others led her to join the Moondance trek to Kilimanjaro. 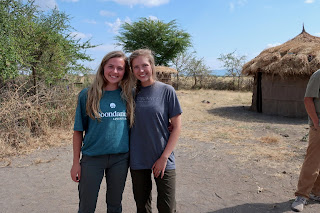 After landing in Tanzania, the Moondance group spent a week at the Mungere School near the city of
Arusha. They worked with the Red Sweater Project, a charity organization that aims make education accessible to the poorest children in the most rural areas of Africa. The school grows its own food to feed the students, and Grace’s group helped by tilling soil and clearing land for the vegetable gardens.
“It was really rewarding getting to help these kids,” Grace said about her time at the Mungere School. “I became very close to them, and I’ve even become penpals with Nate, an 11-year old student.”
After their week at the school, the Moondance group started their trek up Mt. Kilimanjaro. The hike took a little over a week as each step up the mountain became more difficult with the increased altitude, decreased oxygen, and plummeting temperatures.
“The thin air from high altitudes is very hard on your body,” said Grace. “There was one point where, while just sitting down and resting at base camp, I felt completely out of breath. Of course we had to also pack extra layers of clothing for the dramatic changes in temperature, but I don’t think any of us were prepared for how cold it truly was close to the summit.” 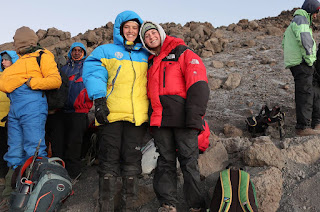 While almost all of the hikers made it safely to the summit, the dangers of their trip were made apparent when one of the students took ill halfway through the climb and required emergency evacuation from the mountain. The temperatures transition from hot and humid at the base to freezing at the summit and the low oxygen in the higher altitudes makes recovering from illness and injury difficult, even for people in the best of health.

One of the more remarkable aspects of this trip is that electronic devices, like cell phones and tablets, are not permitted, so the group members needed to make strong personal connections with one another. They spent 24 hours a day together and relied on each other for company and entertainment.
“I enjoy making real, human connections with other people,” said Grace. “I think that nowadays we are too attached to electronic devices, so even when you’re with friends, there is always a distraction.” 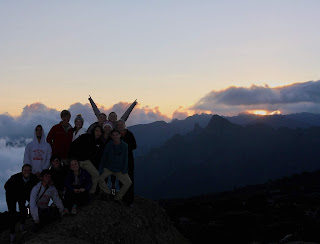 Although her travels have taken Grace to different parts of the world, her next bucket list items are a little closer to home. “I’d like to do Mount McKinley (Denali) next, then Mount Ranier, and all of the mountain ranges in the United States,” she said. “After that, I want to hike through Patagonia in South America.”
Grace aspires to study nutrition science at college and is looking at the University of Memphis or
Sewanee: The University of the South. She intends to continue mountaineering and hopes to serve as a leader for other young people seeking outdoor adventures.
“I would love to lead a group of kids on trips like these,” she said. “I encourage everyone to get outside.”
As for other students wanting to get into the outdoors, she had some advice to pass along. “Just get outside, start with some short hikes and work up from there. Camping can be challenging at first because you have to do everything yourself, but it’s worth it, and it’s so much fun. Getting involved with a program like Moondance is also a great way to get started if you don’t know where to start.”