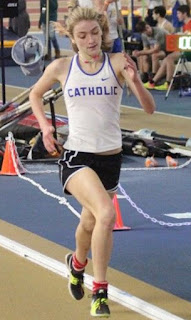 The 5-foot-7 junior raced to the Class 4A individual state championship this past season with a time of 17:14.37, leading the Knights to second place as a team. Tyynismaa also won the Jesse Owens Classic, the Section 1 championship, the Warhawk Challenge and the Spain Park Invitational.

A religious education instructor at her church, Tyynismaa has volunteered locally on behalf of Meals on Wheels and the Humane Society. “Beyond Amaris’ ability on the course or track, she’s the most dedicated athlete I’ve coached in 35 years,” said Montgomery Catholic coach Ed Wright. “She leads by example and encourages all her teammates to be the best they can be.”

Tyynismaa has maintained a 3.70 GPA in the classroom. She will begin her senior year of high school this fall.

As a Gatorade Player of the Year, Tyynismaa will be able to select a national or local youth sports organization to receive a grant as part of the Gatorade Play It Forward program. Every Gatorade Player of the Year state winner receives a $1,000 grant to donate and will have the opportunity to enter for
an additional $10,000 spotlight grant by writing a brief essay explaining why their selected organization
deserves additional support. 12  spotlight grants – one  for each sport – will be announced throughout
the year.