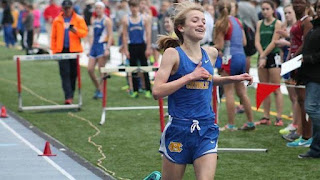 The 5-foot-6 freshman distance runner won a second consecutive Class 4A individual state championship with a time of 17:52.25 this past season, leading the Knights to fourth place as a team. The Montgomery Advertiser’s two-time All Metro Female Cross Country Runner of the Year, Tyynismaa took 20th at
the Foot Locker South Regional championships in 18:06. Unbeaten against Alabama competition in 2015,
her third-place finish of 17:42.54 at the 17th Annual  Jesse Owens Classic was the state’s fastest 5K among
prep competitors this past fall.

Tyynismaa has maintained an A average in the classroom. In addition to donating her time as a mentor and instructor for the U.S. Department of Health and Human Services Centers for Disease Control and Prevention, she has volunteered locally on behalf of her church.

“I think she is bringing the girls to a new level with how good she is,” said Stephen Bowen, head coach at rival Straughn High. “She is pushing my girls to work harder and get better. She is basically resetting the bar for girls’ cross country.”

Tyynismaa will begin her sophomore year of high school this fall.

The Gatorade Player of the Year program annually recognizes one winner in the District of Columbia and each of the 50 states that sanction high school football, girls volleyball, boys and girls cross country, boys and girls basketball, boys and girls soccer, baseball, softball, and boys and girls track & field, and awards one National Player of the Year in each sport.  The selection process is administered by the Gatorade high school sports leadership team in partnership with USA TODAY High School Sports, which work with top sport-specific experts and a media advisory board of accomplished, veteran prep sports journalists to determine the state winners in each sport.