Montgomery Catholic Preparatory School crowned their 2015 Homecoming Queen and King during the half-time ceremonies of the varsity football game as the Knights hosted Holtville High School, September 25, 2015. The school was honored to welcome back the 2014 Homecoming King and Queen, Miss Carlye Schmidt and Mr. Reese Smith to crown the 2015 Montgomery Catholic Preparatory School Homecoming King and Queen. Carlye is the daughter of Mr. and Mrs. Brian Schmidt and is a member of Saint Vincent DePaul Catholic Church. She is currently majoring in Psychology at AUM. Reese is the son of Mr. and Mrs. Robert Smith and is a member of Saint Peter’s Catholic Church. He is currently majoring in Computer Engineering at Auburn University Montgomery.

Agnes Armstrong is the daughter of Mr. and Mrs. Brett Armstrong and is a member of the Church of the Holy Spirit.  She has played varsity volleyball and softball for MCPS.  A member of the National Honor Society, Agnes also participates in SGA, Key Club, Youth Judicial, and Women’s Leadership.
Agnes was escorted by Michael Collins. Michael is the son of Mr. and Mrs. Eddie Collins.  A member of his youth choir, Michael attends Mercy Baptist Church.  He also participates in Football, baseball, basketball and is a member of member of the National Honor Society.

Eryka Ellington is the daughter of Mr. and Mrs. Edward Ellington Friendship Missionary Baptist Church. She cheers for MCPS and is an active participant in the Shield Bearers and National Honor Society.  Eryka further serves her community by volunteering at church. Eryka was escorted by Blake Johnson
Blake is the son of Mr. and Mrs. Bruce Johnson and is a member Saint Joseph’s Catholic Church.  He is a member of the Varsity Football and baseball teams.  Blake is also actively involved in Men’s Leadership, National Honor Society, and his church youth group.

Nadine Moussalli is the daughter of Mr. and Mrs. Samir Moussalli and is a member of Church of the Holy Spirit.  She participates in soccer, basketball, youth judicial, shield bearers, and SGA while maintaining member ship in Mu Alpha Theta and the National Honor Society.  She remains active outside of her school community as a Core Team Leader and Sunday School assistant. Nadine was escorted by Patrick O’Mara
Patrick is the son of Colonel Raymond and Mrs. Michele O’Mara and is a member of the Holy Family Catholic Community at Maxwell Air Force Base.  He has played Varsity Baseball for MCPS while participating in National Honor Society, Science Olympiad, and Junior class president.  An Eagle Scout, Patrick has also been selected as a Daedalian Flight Scholarship Winner.

Junior Attendant: Gabrielle Dallas, Gabrielle is the daughter of Mr. and Mrs. Michael Dallas. Gabrielle is a member of Hallstreet Baptist Church.  She plays basketball for MCPS and enjoys working for the Montgomery Biscuits. Gabrielle was escorted by Morris Albert Lottinger IV. Morris is the son of Morris Lottinger III and Charlene O’Rourke Fincke.  Morris is an alter server a St. Peter’s Catholic Church.  He is also member of the Track and Field team for MCPS.

Sophomore Attendant: Annabel Catherine Starrett,  Annabel is the daughter of Marc and Audra Starrett. She is a member of Church of the Holy Spirit.  She has been an active member in Youth Judicial as well as cross country and track and field. Annabel was escorted by Parker Dennis. Parker is the son of Mr. and Mrs. Dennis.  He is a member of Centerpoint Fellowship Church. Parker plays football and basketball for MCPS. 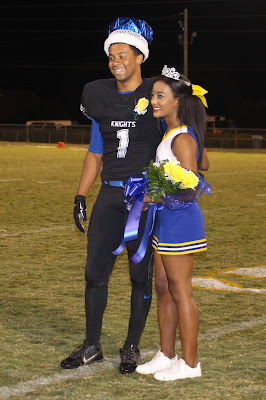 Freshman Attendant: Katherine Koontz, Katherine is the daughter of Mr. and Mrs. Lloyd Koontz. She attends Frazer United Methodist Church.  Katherine plays varsity soccer and junior varsity volleyball for MCPS while remaining active in her church choir. Katherine was escorted by Joseph Tate Holifield.
Tate is the son of Mr. and Mrs. Joseph Holifield.  He attends Frazer United Methodist Church.  He has played for MCPS football and soccer teams.

Miss Eryka Ellington and Mr. Michael Collins were announced as the 2015 Montgomery Catholic Homecoming Queen and King. They were crowned by Miss Carlye Schmidt and Mr. Reese Smith from the Class of 2015. 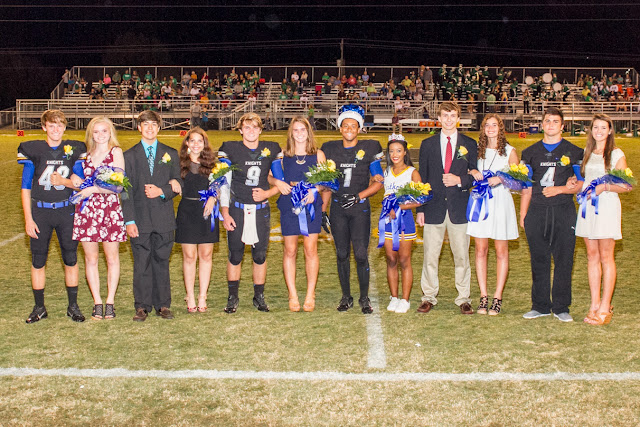 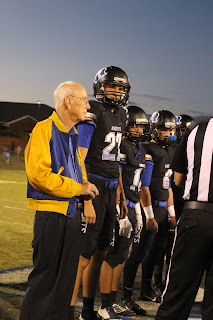 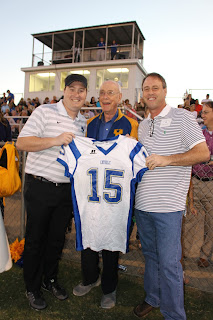 Mr. Marty Taylor from the Class of 1948 joined the Knights football captains at the homecoming game as an honorary captain. Marty wore the number 12 and was on the first Montgomery Catholic football team which was founded in 1945. He was one of only five students who went out for the beginning squad. After recruiting the rest of the team a new legacy unfolded and has continued with pride for 70 years. Montgomery Catholic coach and Mr. Taylor’s grandson, Alex Taylor along with Mark Taylor (Marty’s son and Alex’s father) presented Marty with a game jersey. A Montgomery Catholic commemorative coin was used for the coin toss and given to Mr. Taylor to mark to occasion,

along with heartfelt thanks to him and all the men who have played football for the Knights. 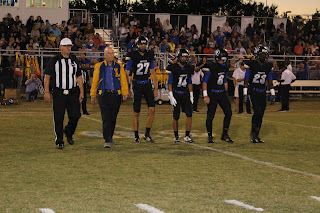 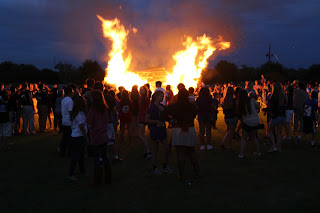 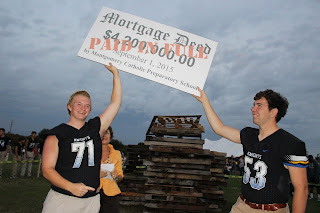 Montgomery Catholic students celebrated Homecoming Week at all campuses with a host of daily activities including the Homecoming Bonfire and mini-parade held on Thursday evening at the Middle/High School Campus for K4-12 families. Alumni Pat McGinn ’85 had the honor of lighting the fire. Friday the Middle and High School ended school with a pep rally. President, Anne Ceasar added fuel to the fire by burning the mortgage and Mrs. Ceasar announced that Montgomery Catholic Preparatory School is debit free. A Friday night victory over Holtville (33-14) led to a fun night as the High School campus ended the week with their Homecoming Dance on Saturday, September 26, 2015 held at the Montgomery Catholic Holy Spirit Campus Gym. The theme was Carnival.