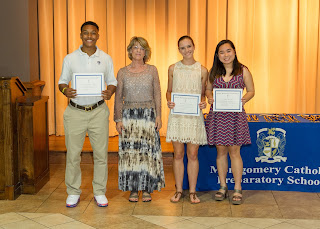 A total of 60 students were recognized during the ceremony for being inducted into the Loretto chapter of the National Honor Society (NHS), 30 new members and 30 graduating seniors.

Honor cords were given to the seniors that participated in Science Olympiad, Mu Alpha Theta and Key Club.

Honor roll certificates for both the A and A/B honor rolls were given to those students who attained A or A/B honor roll throughout the school year for each grade level.  The Joe Arban Perfect Attendance Award was given to Spencer Back, Mai Ellington, Hannah Parrish, Joshua Tobias for having perfect attendance this year.

Mrs. Anne Ceasar, president, presented the second ever Sister Martha Belke Servant Leader award to
Miss Anna Nutting for her school spirit and never ending support of the school. Anna is the daughter of Ann and Bill Nutting of Montgomery. A surprise to all, Mr. Justin Castanza, principal presented  the third Sister Martha Belke Servant Leader Award to James Avery for his willingness and commitment to serving his school and his peers as a student at Montgomery Catholic. James is the son of Carole and Robert Avery of Montgomery. 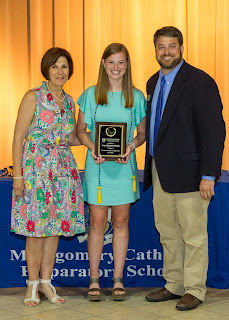 Mr. Justin Castanza, high school principal, awarded the Montgomery Catholic Leader of the Year award to Miss. Paige Rentfro. Paige has served the school in numerous leadership positions throughout her school career including a leader in SGA, a National Honor Society officer, Mu Alpha Theata, Key Club member and a member of the Pep Club, on top off all that she is also an athlete. She is the daughter of Missy and Donny Rentfro of Montgomery. 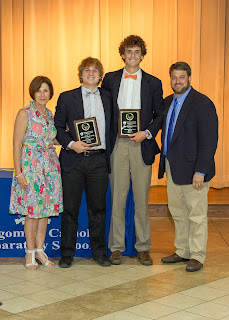