Honor cords were given to the seniors that participated in Science Olympiad, Mu Alpha Theta and Key Club.

Honor roll certificates for both the A and A/B honor rolls were given to those students who attained A or A/B honor roll throughout the school year for each grade level.  The Joe Arban Perfect Attendance Award was given to Emma Gandy and Mitchell Aaron for having perfect attendance this year.

The evening culminated with two of the highest awards given at Montgomery Catholic: Leader of the Year and the Ideal Graduate.

Mr. Justin Castanza, high school principal, awarded the Montgomery Catholic Leader of the Year award to Mr. James Sadie. James has served the school in numerous leadership positions throughout his school career including a leader in SGA, a National Honor Society member and a Youth Legislature team member. He is the son of Lisa and John Sadie of Montgomery. 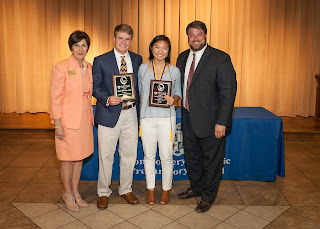