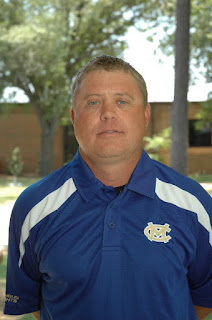 Hall, 41, succeeds Tim Trokey, who is returning to his family home in California to continue his coaching and teaching career. Trokey’s teams were 25-27 in five years, and he led the Knights to the state playoffs in two of the last three years.
“This is such an exciting opportunity for me. I’m excited about getting back into a Catholic school community,” said Hall, who spent four years as an assistant coach at Bishop Verot Catholic High School in Fort Myers. “I look forward to being a part of helping Montgomery Catholic develop quality young men, on and off the field.”
Another thing that led Hall to seek the Montgomery Catholic job was the passion for football that is so prevalent in Alabama.
“There are so many great athletes in Florida, but nowhere is the passion for football any greater among players and fans than it is in Alabama. I look forward to working here and experiencing the great love everyone has for the game.”
Hall took over a floundering program at Cypress Lake only three weeks before the first game of the 2007 season. The Panthers were 3-7 that season and 4-6 in 2008. However, under Hall the school’s level of competitiveness improved drastically. The offense averaged 439 yards per game last season, fourth best in the state.
Prior to his time at Cypress Lake, Hall was the defensive coordinator at Bishop Verot and for two seasons at Okeechobee High School.
“As we began this process, our goal was to find the coach who was the absolute best fit for Montgomery Catholic. We wanted a person who could pick up where Coach Trokey left off and continue to build a consistently competitive, successful program,” said athletic director Jim Tolbert.
“I am confident that Chris Hall is the right fit for Catholic. He is a high-energy guy with innovative ideas about how to build a football program that is a winner on the field and off. I’m excited to have Chris join our staff.”
Hall is already on the job, meeting with coaches and getting involved with the off-season strength and conditioning program which kicked off last week.
Football practice officially begins in Alabama on August 3. Catholic will hold its annual Back To School Pep Rally at 6:30 p.m. on August 14 and then host Trinity in a pre-season scrimmage on August 21 at 6:30 p.m.