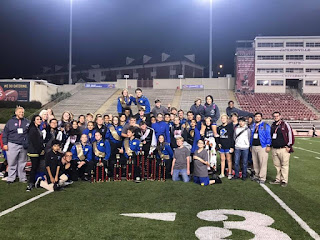 Montgomery Catholic may have a relatively young band program, but it has come a long way in its short history. In 2010 when Director of Bands Alex Johnson first started at Montgomery Catholic, the marching band only had 12 members. Nicknamed “The Dirty Dozen,” the small but dedicated group of musicians kept the fans entertained throughout the football season. Today, the marching band has over 60 musicians and auxiliary who take the field at every varsity football game, both at home and away. During each game, they provide musical entertainment with stand tunes and cheers that they choreograph with the varsity cheerleaders. Not only has the band increased in number year after year, but also it has accumulated countless accolades and recognition. Led by Johnson and his band director wife, Kristine, and assisted by interns from local universities, the program has flourished in recent years, both on the field and on the stage.
“This has only been possible because of the continued commitment of the students,” said Johnson. “No band program can run without outstanding student leadership, and each group in the Catholic band has been mentored by those before them. It’s been a legacy of excellence.”
When it comes to leadership, the students are expected to take charge, especially because the marching band includes 7th and 8thgrade students in various roles. Like any other marching band, Montgomery Catholic relies on older students to teach marching techniques to new members, run sectional rehearsals, and ensure that each group under their supervision both looks and sounds good. In addition to that, each section must work with each other to maintain the integrity of the show. Starting with band camp in the summer and continuing throughout the football season, the band must rehearse several times a week to improve and perfect their show. The students spend countless hours together, and they learn to act as a cohesive unit. 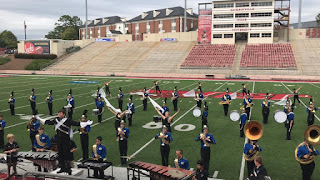 “It can be challenging to balance leadership and friendship with those in your section,” said junior Angela Gier, high brass section leader. “But our role is so important, and it’s rewarding to watch as everyone improves and grows throughout the season.”
In addition to playing at every football game, the marching band also performs in marching competitions in the area. Since they only participate in two contests during the season, the students feel a lot of pressure to ensure their performance is flawless. In the past two years alone, the band has won “Overall Best in Class” at each competition they have been to, and they had also picked up several category awards, such as for auxiliary, drumline, pit percussion, woodwinds, and brass. For the past five appearances at the Jacksonville State Contest of Champions, the Montgomery Catholic drum major has won “Best in Class,” including this year’s drum major, senior Bobby Crawford.
“It’s almost a dynasty going on,” said Johnson. “No pressure or anything for future drum majors!”
On top of the demanding marching schedule, the band classes also have been preparing for the upcoming fall and winter concert season. Johnson, who also serves as the District 6 Chairman for the Alabama Bandmasters Association, believes that classroom emphasis should be on concert band as it provides an important academic and artistic learning environment.
“Marching band is just one spoke of the wheel,” he said. “Concert band is the hub of that wheel. It is truly where one learns the art and the science of music.”
While all Montgomery Catholic bands, grades 5 through 12, will be performing their annual Christmas concert on December 5, the high school band will also take the stage for an exhibition show on November 5. This is the first time that the high school band has done an additional show in the fall, but Johnson believes that the high school band needs another opportunity to perform.
“The high school band this year is an exceptional group, and they needed another outlet to showcase their talents,” said Johnson.
The November exhibition will feature classic concert band favorites Molly on the Shore by Percy Grainger, First Suite in E Flatby Gustav Holst, Elegy for a Young American by Lo Presti, and Riders for the Flag by John Philip Sousa.
Starting with 12 in the high school and currently standing at around 130 from 5th grade to 12th, the Montgomery Catholic band program has come leaps and bounds from the Dirty Dozen days and now requires a larger, more specialized facility. The second phase of the Montgomery Catholic capital campaign, Building on Faith, Family and Tradition, is moving into its final stages now that the first phase, the construction of the new gym, is complete. The project sees the conversion of the old Fr. Pat Delahunty Gym into a climate-controlled fine and performing arts building that will house the band, choral, and drama departments. The renovated building will have classrooms for band and chorus, individual practice rooms, instrument storage, and offices for staff. There will also be a student center which will serve as a gathering space to facilitate club meetings and other activities. Renovation on this new space is ongoing; completion is estimated to be during the winter of this year.