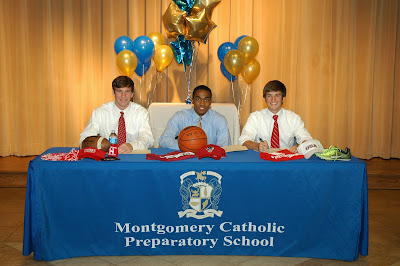 The trio was recognized with a school celebration May 16 that included family members, teammates, coaches, teachers, classmates and local media members

Davison, who is Catholic’s all-time leading scorer in boys’ basketball and was the Montgomery Advertiser’s Small School Player of the Year, signed a scholarship with Florida Institute of Technology (Florida Tech). Florida Tech is an NCAA Division II school located in Melbourne, Fla.

Cotter, who earned all-state honors in three sports – cross county, wrestling and track – for two consecutive years, has been invited by the University of South Alabama to be a member of their cross country and track teams.

Wujcik, who played quarterback for the Knights the past two seasons, has been invited to play football at nearby Huntingdon College, which participates in NCAA’s Division III.

Davison averaged 22.6 points and 7.9 rebounds per game as a senior. He finished his career with 1, 957 points. Catholic teams won 77 games in Davison’s four years on the varsity basketball team, 67 in the last three seasons under Coach Ken Klinger.

“It’s taken hard work to get to this point and it’s going to take more hard work in the future,” said Davison. “Coach Klinger has helped me understand that if you don’t work hard, you’re not going to have success.”

As a senior, Cotter finished fourth in the Class 3A cross country meet last fall, third in the 140-pound division of the Class 3A state wrestling tournament, and he won the 800-meter run at the Class 3A state track meet recently. He also joined Connor Wright, Jarrett Mason and Skip Martin to win the 4×800-meter relay at the state meet. In addition, he finished second in the 1600 and 3200.

Wujcik, an excellent athlete with a strong arm and outstanding speed, will bet an opportunity to play quarterback at Huntingdon.

“This means everything to me,” said Wujcik. “I’ve trained and worked for this opportunity, and it’s come together with Coach (Mike) Turk giving me this opportunity to play for his program.”