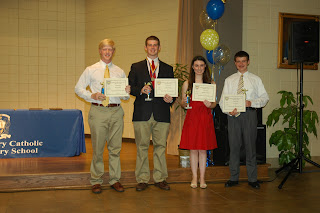 Montgomery Catholic Preparatory School recently honored their top high school students at the annual Academic Awards Ceremony held in the Dolly Barranco Activity Center.  Many honors were bestowed including the most outstanding student in each subject area.  These students are Barbara Bradley in Foreign Language and English, Josh Stark in Science, Joseph Sutton in Social Studies, Lexie Segrest in Theology, Joseph Sutton in the area of Performing Arts, Zach Hulcher in Mathematics, and David Norris in Technology.

Montgomery Catholic had 90 students who participated in the American Mathematics Competition (AMC) 10 and 12 this year.  Mandy Jones, Willie Ravelo, Jinah Kim, Linda Zhang, and Forest Phillips were recognized for their top scores on the AMC.

Honor roll certificated for both the A and A/B honor rolls were given to those students who attained A or A/B honor roll throughout the school year for each grade level.  The Joe Arban Perfect Attendance Award was given to Maddie O’Mara for her perfect attendance this year.