Montgomery Catholic has four awards which honor individual team members for their hard work and dedication to their sport. Three of these distinguished awards honor individuals who had tremendous influence on our athletic program: Father Patrick Delahunty, Mr. Joe Fields, and Coach Jack Kresek.

Amaris Tyynismaa was recognized for her 4th consecutive 4A Cross Country Championship, and her state championships in the 1600M, and 3200M in indoor track.

Montgomery Catholic awarded two scholarships for school tuition. The first was the Coach Ralph Furlong Scholarship, established in 1998. Initiated by a member of his 1946 football team, the intent of this scholarship is to honor one of Catholic’s greatest coaches, whose record of 24 straight wins from 1947-1949 remains a school record. The Furlong scholarship is a partial tuition scholarship given to a high school student who demonstrates a commitment to both extra-curricular and his or her studies. The 2018 recipient of the Coach Ralph Furlong Scholarship was D.J. Carter. The second scholarship given was the Caitlyn Marianne Wiggins ’08 Memorial Scholarship, established in December of 2013. A partial tuition scholarship awarded annually in Caitlyn’s honor, a 2008 MCPS graduate and varsity athlete who was killed in an automobile accident in 2013. The scholarship is given for one school year to a female student athlete at Montgomery Catholic Preparatory School’s (MCPS) High School Campus.  Caitlyn’s family and friends endowed this scholarship to give another child the opportunity to achieve the type of success that Caitlyn enjoyed in life. Nona Johnson and Claire Mills both received the Caitlyn Marianne Wiggins ’08 Memorial Scholarship presented by Caitlyn’s aunt, Andrea Hause Durbin. 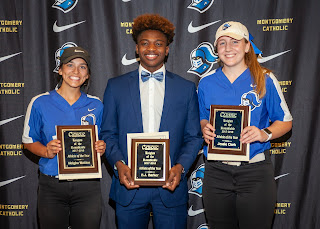 To close the banquet, Deacon Raymond Gueret of Holy Spirit Catholic Church led the parents and guests in a final blessing for all of the senior athletes.