Montgomery Catholic Preparatory School honored their top high school students and student-athletes at the annual Academic Awards Ceremony held in the Dolly Barranco Activity Center on May 13, 2020. Due to the restrictions on public gatherings, the event was broadcast via Facebook Live, and attendance was limited to award presenters and the Harbin Award recipient. After an introduction from MCPS Middle and High School Principal Justin Castanza and invocation by Theology Chair Mr. Tom Riello, President Mrs. Anne Ceasar commenced the evening by presenting the 24th annual Charles T. Harbin Distinguished Service Award to Mrs. Linda Belsterling (class of 1978) Anderson, recognizing her years of volunteer service to the school. 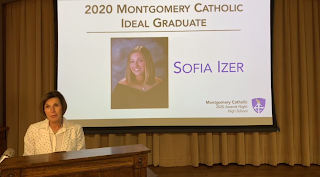 Next were the President’s List and the Principal’s List. Students recognized on the President’s List achieved a 4.0 or higher GPA. This included 33 seniors, 25 juniors, 19 sophomores, and 17 freshmen. The Principal’s List recognized students who earned between a 3.8 to 4.0 GPA and included 12 seniors, 5 juniors, 4 sophomores, and 5 freshmen. Freshman Laura Thomas Zhvania was awarded the Joe Arban Perfect Attendance Award.

The awards ceremony was a perfect opportunity to recognize Sofia Izer for winning a National Merit Scholarship. She was among 2,500 American high school students and one of two in the River Region who earned this scholarship through high achievement on the PSAT standardized test.

Montgomery Catholic’s student-athletes were also recognized during the virtual ceremony and started with four awards which honor individual team members for their hard work and dedication to their sport. Three of these distinguished awards honor individuals who have had a tremendous influence on our athletic program: Coach Jack Kresek, Father Patrick Delahunty, and Mr. Joe Fields.

The top athletes from each sport are nominated for the Knights of the Round Table Award, an honor that recognizes the top male and female athlete of the year. These students both excel in their sports and display leadership that sets an example for their peers. The nominees were Katherine O’Connor, Lorren Pharrams, Hayden Pritchett, Jack Burt, Nate Downes, and Darrell Gibson. The winners of the Montgomery Catholic 2020 Knights of the Round Table award were Katherine O’Connor and Jack Burt.

The Leader of the Year award was presented to Anna Sadie. Anna is no stranger to leadership, the spotlight, or Montgomery Catholic.  In her leadership essay, she stated, “ever since I was little, being a leader, was ingrained in my mind from my family.” Anna is a member of the National Honor Society, Young Women’s Leadership, Youth in Government, SGA, and the Varsity Cheer team. Anna is the daughter of Mr. and Mrs. John and Lisa Sadie of Montgomery, Alabama.

The Sister Martha Belke Servant Leader Award was presented to Sarah Rose Burden. Sarah Rose was selected for this award based on her commitment to serving those around her in her school and her community. She has a deep love for Montgomery Catholic and carries on the tradition of excellence started 147 years ago by the founders of our school, the Sisters of Loretto. Sarah Rose is the daughter of Mr. and Mrs. Perry and Ellie Burden of Montgomery, Alabama.

The Ideal Montgomery Catholic Graduate award was given to Sofia Izer. Sofia is a scholar-athlete, a passionate artist, and a selfless servant. She has a strong and mature faith life, which she lives out every day. Sofia is close to her family and her God, and she is a devoted friend. She was recently awarded the National Merit Scholarship, a highly competitive honor that is only given to 2,500 high school students nationwide. Sofia is the daughter of Dr. and Mrs. Jim and Gina Izer of Montgomery, Alabama.

Montgomery Catholic is proud to recognize all of our high-achieving students and our elite student-athletes who exemplify faith, excellence, and service every day and demonstrate what it means to be “built by Catholic.”