On the evening of February 10, 2020, friends, supporters, faculty, and students of Montgomery Catholic Preparatory School gathered inside the new performing arts building at the middle and high school campus for its dedication by Thomas J. Rodi, Archbishop of Mobile. It was standing room only as a large crowd amassed to take part in the ceremony to unveil and bless the new facility. 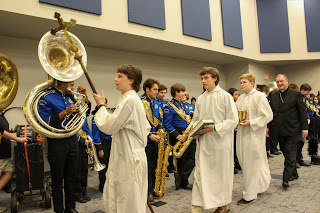 “They’ve always had fine arts,” said Miss Gwen Byrd, Superintendent of Catholic Schools of the Archdiocese of Mobile, in her opening remarks about Montgomery Catholic. “But now this is a facility for the arts, and it’s going to get better and better for our curriculum.”

The 51-year old Father Pat Delahunty Memorial Gymnasium, which was replaced by a 33,000 square foot athletic center in the fall of 2019, was breathed new life as a state-of-the-art performing arts classroom facility. The transformation of the Fr. Delahunty comes at a time when the band, chorus, and drama programs are seeing tremendous growth and expansion, and Archbishop Rodi emphasized the importance of incorporating the arts into a well-rounded curriculum.

“God has given us talents and abilities,” Archbishop Rodi said, “and a Catholic school educates the whole student, going to back to the concept of being educated academically, athletically, socially, culturally, and spiritually. That’s a unique gift of a Catholic school.” 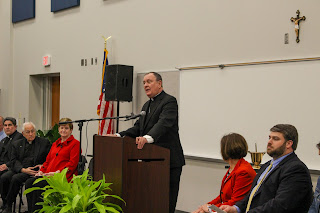 When Director of Bands Alex Johnson took the helm in 2010, the marching band only had 12 members. Today, the award-winning Marching Knights band features over 60 musicians and auxiliary members and grows each year. The concert band program has around 80 students in grades 7 through 12 and 50 students in grade 5 and 6.  In the spring of 2019, the 7th grade, 8th grade, and high school concert bands each earned straight superior ratings in all categories at the Alabama Bandmasters Association Musical Performance Assessment, an honor that had not achieved by all three bands simultaneously before. Additionally, 25 students from the middle and high school bands were selected for the 2020 ABA District VI Honor Bands, 11 of whom were also selected for the 2020 Alabama All-State Honor Bands.

“This facility is not just a building; it is a representation of our past, present, and future as a school and specifically of the fine arts program,” said Alex Johnson. “When I started 10 years ago, we only had 12 students in the Marching Knights. I knew that there was nothing that I could do as an individual to turn the program around. But those kids who were the ones who turned it around. They dug their heels in and made everything happen, which snowballed and has led us here today.”

The choral and drama departments are also looking forward to the renovation as the new building will feature a classroom space dedicated to both programs. The high school choir sings at every weekly school Mass. Serving the greater community, the choir also sings at the annual Red Mass held at St. Peter Catholic Church to mark the beginning of the judicial year. They were also invited to sing at the 25th anniversary celebration of the Montgomery Area Perpetual Adoration Chapel at Our Lady Queen of Mercy Church. In the 2018-2019 season, the drama students performed A Christmas Hard Day’s Knightin the style of a madrigal dinner theater, followed in the spring by the 2012 revival version of Stephen Schwartz’s Godspell. This fall, students from all four Montgomery Catholic campuses performed a scenes program, Alabama Stories, a montage of excerpts from plays that take place in Alabama. The drama program will perform Thoroughly Modern Millie in the spring of 2020. 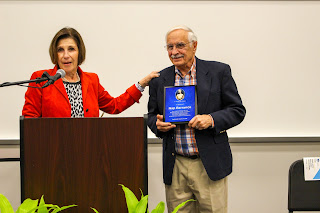 The Building on Faith, Family & Tradition capital campaign raised over $3.5 million in the eleven months after the campaign began. Groundbreaking for the new gym took place on October 10, 2017, and the first phase of the campaign saw the completion of a 33,000 square foot athletic complex which was opened in August 2019. The second phase saw the conversion of the Fr. Delahunty Gym into a climate-controlled fine and performing arts building that houses the band, choral, and drama departments. The renovated building features classrooms for band and chorus, individual practice rooms, instrument storage, and offices for staff. There is also a student center that serves as a gathering space to facilitate club meetings and other activities.