Bringing home trophies wasn’t applause enough for the Montgomery Catholic boys and girls cross country running teams. Both teams won the state championship this fall, and it was the first time that Montgomery Catholic had both boys and girls teams win at the same time. The cross country runners and their coaches, Ed Wright and Hollis Johnson, were invited to City Hall to be publicly recognized by Mayor Todd Strange before the city council meeting. One by one, the champions were called to the floor, congratulated, and given a certificate of recognition from the mayor. 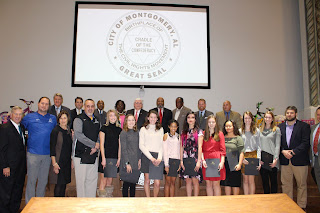 The cross country team had put in long hours of intense training leading up to the state championship meet, and the results reflected their efforts. While previous Montgomery Catholic boys teams had won the state championship, it was the first time that the girls team had ever brought home the state trophy.
“We had worked so hard this season, and all the training finally paid off,” said freshman Lily Bachl, who was the individual runner-up in the state meet. “I definitely feel like we deserved it.”
For Senior Isabelle Cochran, who came in fourth place, it was a perfect ending. “With it being my last year on the team, it was great to end on such a good note. We’ve been runner-up several times, so to finally win the state championship makes me very proud of the whole team.” 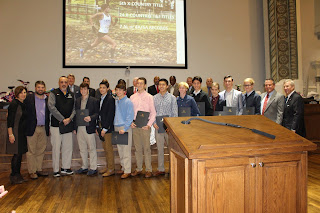 The boys were equally excited about their results, but it came as the result of hard work and persistence.
“Even though we had won sectionals, we knew we would have tough competition ahead of us at state,” said Senior Grant Walker, who came in fourth place for the boys. “We ran hard, and I ended up beating my personal best time.”
“I personally performed so much better this season than last season, and the work we all put in paid off,” said Junior Chris Valencia.