Montgomery Catholic Celebrates the Class of 2020 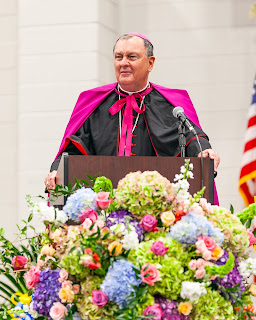 On the evening of Tuesday, June 23, 2020, the 145th graduating class of Montgomery Catholic Preparatory School gathered in the PICE Knights Arena at the MCPS Middle and High School Campus. Archbishop Thomas J. Rodi, Superintendent of Education Gwendolyn Byrd, Montgomery Catholic President Anne Ceasar, and High School Principal Justin Castanza were joined by Reverend Fathers Patrick Gilbreath, Den Irwin, Nicholas Napolitano, Alex Valladares, and Wayne Youngman, along with seminarian Joseph Schultz, as the special guests of the class.
Due to government-issued social distancing guidelines and face mask mandates, the graduates were seated with appropriate distance from each other, and each was given a special face mask to wear during the ceremony that matched their graduation regalia. Family seating was extremely limited, but the entire ceremony was broadcast on Facebook Live, enabling friends and family to take part in the festivities from their homes.
Salutatorian Sofia Grace Izer and Valedictorian Clare Josephine Wilson addressed their fellow graduates, special guests, family, and friends after the class received their diplomas from Archbishop Rodi. In closing, Montgomery Catholic teacher Kerri Moore led the class of 2020 and alumni in singing the Montgomery Catholic Alma Mater, “Catholic, Our Refuge.” 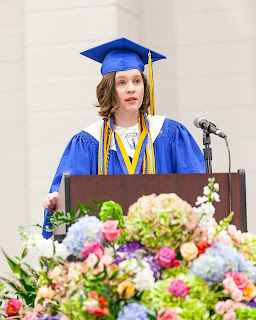 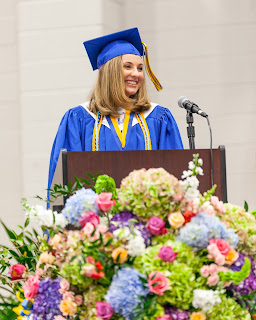 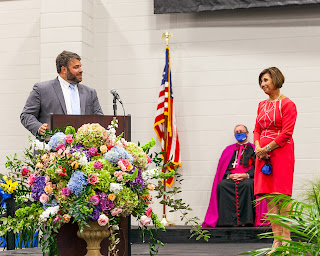 Before the conclusion of the ceremony, Castanza, who will be assuming the role of Montgomery Catholic President upon Ceasar’s retirement from the position this summer, had one last surprise. After listing Ceasar’s accomplishments throughout her career as an educator and as President, Castanza unveiled the Anne Ceasar Endowed Scholarship, a fund that will support students in need at Montgomery Catholic, and furthering her legacy of helping families in our community.
The 80 members of the Class of 2019 have earned $6.4 million in scholarship offers from 23 colleges and universities across the United States. The top 20 percent of the class achieved an average ACT composite score of 31 and an average GPA of 4.28. Additionally, 18 of the 80 graduates started school at Montgomery Catholic in kindergarten, most of whom are graduating with honors, including valedictorian Clare Wilson.  Our graduates include a National Merit Scholarship Winner, an AP Scholar with Distinction, an AP Scholar with Honor, 30 members of National Honor Society, seven collegiate athletes, a future member of the armed forces and a future firefighter, Hugh O’Brian Youth Leadership Conference ambassadors, a state champion wrestler, a Great American Marching Band member, state champion cross country runners, members of the VEX Robotics World Championship team, three football players of the year, volleyball player of the year, male basketball player of the year, wrestler of the year, All-American cheerleaders, and members of the all-district and all-state honor bands. Their achievements have energized our Montgomery Catholic family, and they have left a new school spirit for future classes to be proud of. 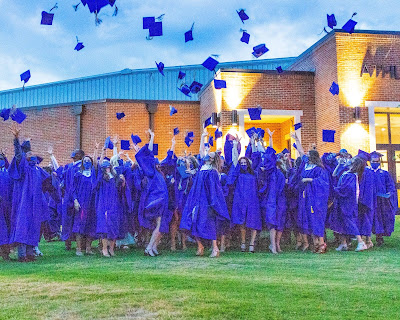