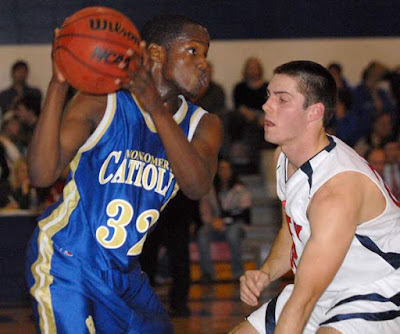 The Montgomery Catholic Boys Varsity Basketball team seems to have found their groove with wins over big city rivals, defeating Montgomery Academy and St. James, within the last week. Head Coach Pete Arner took over a program that went 19-10 last season, played in the sub-regional round of Class 3 A playoffs, and lost eight seniors from the team. With three seniors returning this year, the Knights are a young and developing team.

In the beginning there were obvious growing pains against tough competition. With learning a new system, a new coaching style, and new teammates, the Knights have worked hard to find their groove. Things began to turn for the Knights around Christmas, finishing second in the Shades Mountain Christian Tournament, winning two out of three games.

At the heart of their progress has been much better defensive play, which is what Coach Arner stresses with the team. The players have a better understanding and are getting more comfortable with their roles.

“Our success is attributed to being more familiar with what we are trying to accomplish as a team. Learning a whole new system was overwhelming for them at first, but I give a lot of credit to this team. They have faced some adversity, battled through it, and kept believing. As a result, we are seeing the fruits of their labor throughout this season,” said Coach Arner.

“Another component is leadership. James Watkins has really stepped up as a senior and team captain. I’m proud of his work and dedication to the success of the entire team,” Arner added. “We’re not there yet and we’ve still got a long way to go, but positive steps are important for us at this early stage of our program.”

The Knights gained confidence with two big come-from-behind wins against Montgomery Academy in a nail-biting 45-43 victory and a 64-44 win over neighboring St. James. In both games, the Knights were trailing at the half and turned it on in the third and fourth quarters to take the lead and win the games.