Miles Represented State as Student Ambassador with People to People 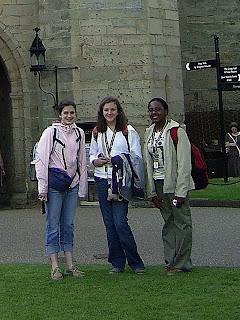 Mary Frances Miles, an eighth grade student at Montgomery Catholic Preparatory School, served as a student ambassador in the People to People program for the State of Alabama this summer in Europe.

Miles spent 20 days traveling all across England, Scotland, Whales, and Ireland. While in England, she met with a member of the British Parliament as well as enjoyed a “home stay” adventure with family during the trip.
In London, Miles watched the changing of the guard at Buckingham Palace, enjoyed a cruise of the River Thames, and explored the infamous Tower of London learning about its fascinating history as fortress, residence, prison, and home of Britain’s Crown Jewels. Miles took in a few golfing lessons in St. Andrews, cruised around Loch Ness, visited the ruins of Urquhart Castle, and walked the cobblestone streets of Royal Mile while in Scotland. In Ireland, Miles visited the glass factory to see how the famous Waterford Crystal is made, strolled O’Connell Street, and kissed the Blarney Stone.
Miles’ first trip as an ambassador with the People to People program was in 2006 when she attended the Yosemite Adventure for 14 days. She received an official proclamation as an Ambassador for People to People from Governor Bob Riley. Mary Frances Miles is the daughter of Dee and Sandra Miles of Montgomery.
Pictured: Mary Frances Miles, center, stands in front of the Warwick Castle in Warwick, England. Miles served as an Ambassador for People to People for the State of Alabama this summer.