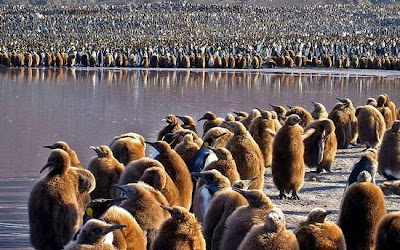 by Brandon McClure
Antarctica is considered one of the harshest continents in the world. With brutal summers and even harsher winters, it’s amazing life can even sustain there.

The king penguin lives on sub-Antarctic islands, in colonies away from the snow and ice such as beaches, valleys and glacial moraines. Trey Vaughan captured the majesty and beauty of the animals with his digital camera during a family trip to the icy continent.

And the result is first-place in the 2008 Abercrombie & Kent Adventure Crew photo contest.
Trey, 13, a seventh-grader at Montgomery Catholic Preparatory School, didn’t believe his photo would earn the top prize in the international competition.

“Antarctica was really fun,” the budding photographer said. “Those were some of the best pictures I have ever taken. I’m the most proud of them.”

Trey’s dad, Ray Vaughan, took his family to Antarctica in December 2006 through Abercrombie & Kent, a travel company that offers a wide variety of destinations to adventure seekers. Antarctica is one of the company’s biggest draws, attracting thousands of tourists each year.
Vaughan had previously taken the trip before by himself, but this was the first time Trey, then 11, had been. He is ecstatic, but not surprised that Trey won top honors for his picture of king penguins on Antarctica’s South Georgia coast.

“I’m real proud of Trey,” Vaughn said. “He has always had artistic ability since he was young. We just try to encourage that and let it grow.”

When asked how his photos stacked up against his son’s, Vaughan replied, “His were better then mine. I had some pretty good photos myself, but Trey’s photos were really good.”