Knights Advance to the Second Round of the Playoffs 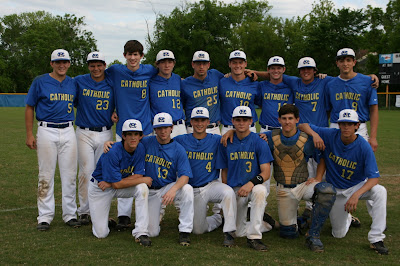 Montgomery Catholic Preparatory School’s Varsity Baseball Team advances to the second round of the playoffs by defeating Geneva at home Monday, April 22.

The Knights battled back after losing the first game of a three-game first round playoff series with Geneva to win the final two games of the series, advancing to the second round later this week.
The Knights (15-15) won game two 7-6, before shutting out Geneva 4-0 in the third and final game of the series.
Montgomery Catholic will now face Slocomb in the second round of the AHSAA playoffs beginning with a Friday doubleheader.  The first game will start at 1:30 pm, followed by the second game at 3:30 pm.  The if game will be scheduled for Saturday afternoon at 3:00 pm, with all three games scheduled for Brannon Cochran Field on the campus of Montgomery Catholic.
There will be an $8 admission price set for Friday, and a $6 admission price set for Saturday; all set by the Alabama High School Athletic Association (AHSAA).
The Montgomery Catholic Baseball Team is coached by head coach Brad Parker and assistant coach Wes Henderson. Team Roster: Greg Rickels, Dan Manzari, Blake Johnson, James Sherman, Kyle Berher, Robert Smith, Matt Brooks, Jacob Hulcher, Bryan Rodopoulos, Cole Dixon, Chase Forshey, Chase Stewart, Brett Foxworth, Blayne Spigner, Reese Smith, Dean Rodopoulos.