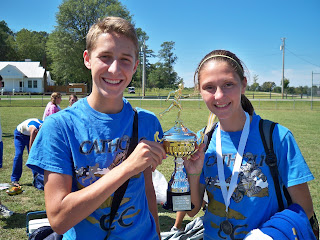 Montgomery Catholic juniors Katherine Terino and Jarrett Mason dominated their races at the Kudzu Hills Cross Country Invitational at Cold Springs High School in Bremen. The Meet features some of the best small school competition in Alabama on a challenging course marked by lots of hills.

In the girls race, Terino was one of the pre-race favorites along with Logan Ayres and Ayleana Mami from St. Bernard’s Prep, Cassi Still of host Cold Springs High School, Maaike Shelton of Pisgah, and 2010 runner-up, Rachel Stowe of Hatton. During the first half mile of the 5 km race, there was a lot of congestion in the front of the pack as a few of the girls attempted to control the pace. As the course widened, Still shot a gap between the top three runners and Terino went right with her. Finally able to run freely, Katherine accelerated down the hill leading to the one-mile mark and began building an insurmountable advantage. By the end of the race, Terino was almost a full minute ahead and broke the finish tape with fastest time ever run by a Lady Knight and the second fastest time ever run in the history of the race, 19:58.43.

In the boys’ race, the Knights hoped to defend their team title from 2010. The primary challenge would be from 3-time 1A-2A state champion, Hatton, and host Cold Springs High. A fast race was expected since some of the best runners in the state were entered. Cold Spring High’s own Blake Clavert shot off the starting line and led the field in a fast opening pace. Racing Knights Jarrett Mason, Matt Pouncey, and Skip Martin followed in the lead pack. Close after them were sophomore Dylan Martin, freshman Tucker Wilkinson, and eighth grader Patrick Gregorius. In the next group were seventh graders Josh Davis, James Sadie, and Sullivan Fralish.

At the mile mark, junior Jarrett Mason stormed in to the lead and set a blistering pace. Pouncey and Martin responded by going with Mason’s surge. As the racers emerged from the kudzu, Jarrett had lengthened his lead to almost 30 seconds and Pouncey was in hot pursuit of runners from Cold Springs and Hatton. As they sped to the finish line, Mason crossed the line in 17:16.11 to claim first. Pouncey cruised in at 17:35.66 for fourth and Skip finished in 18:21.02 for sixth. The team scoring for the Knights was rounded out by Tucker Wilkinson’s new personal record of 19:20.44 for 23rd and Patrick Gregorius nailing down 39th in 20:29.18. Hatton won the meet with 49 points and Catholic had to settle for second with 63 points (low score wins in Cross Country).

Jarrett Mason’s time was the tenth fastest ever recorded in the history of the meet. It was also the fastest time ever run by a Knight on the course. Almost every Catholic runner ran their best time for the year. Both teams head to the Jesse Owens Invitational on the same course in Oakville that will host the State Meet in November.