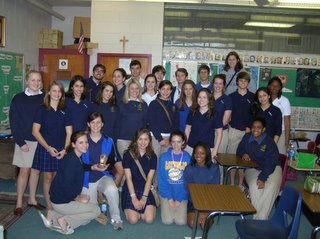 One of the Montgomery Catholic teams consisting of Trey Griffith, Thomas Herge, Cynthia Weber, Roscoe Anderson, Kristin Sutton, and Bob Weber, who were coached by Richard Dean ’78, was named a TOP 5 Prosecution Team, and in their final trial, won the verdict. Two students from Montgomery Catholic, Cynthia Weber as a member and Trey Griffith as first alternate, were named members of the 8-person (4-member and 4-alternate) Alabama All-Star Team that will participate in the National Mock Trial Competition in the spring in Oklahoma City.

During the weekend event, two students also participated in the Talent Show where Cynthia Weber performed an original ballad while playing her guitar and Thomas Herge performed a song written by the Montgomery Catholic band director, Mr. Kerry Palmer, on his clarinet. Both received standing ovations. With the success of Youth Judicial, the Montgomery Catholic Government Club is looking forward to participating in YMCA’s Youth Legislature event planned for spring 2006.