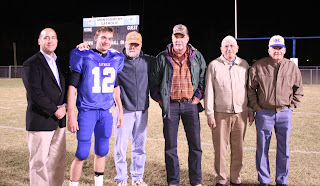 On Friday, October 29, Montgomery Catholic recognized all of the members of the senior class who participated in Band, Cross Country, Volleyball, Cheerleading, and Football this fall during a special pre-game presentation before the last home football game.  Among the 28 seniors, John Talbot is a third generation Catholic student and football player whose father, grandfather, uncles, and great-uncle all played football for the Knights, dating back to the days when Montgomery Catholic was St. Mary of Loretto.  John was escorted by his parents Mike and Angel (Stanaland) Talbot, who are both members of the class of 1982.  Montgomery Catholic Preparatory School is one of the oldest, continuous, non-public schools in the state which was founded 137-years ago in Montgomery by the Sisters of Loretto in October of 1873.


Click on the link to view all of the photos from Montgomery Catholic’s Fall Sports Senior Night.