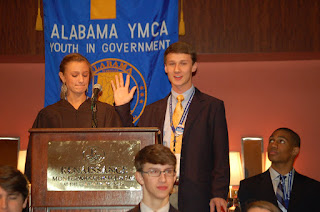 The 64th annual Youth Legislature Conference convened at the Alabama Statehouse in Montgomery during the weekend of Friday, February 24 through Sunday, February 26, 2012.

High school delegates from all over the state met in the chambers of the House of Representatives and Senate to debate and vote on bills they had written. Governor Robert Bentley and Judge Tommy Bryan were both in attendance to welcome the delegates and inspire them to stay involved with our representative government and to lead by example.

Students from Montgomery Catholic had a very successful weekend. House Bill #40, entitled the Mandatory Storm Shelters for Trailer Parks Act, written by Chad DuBois and Megan Karst, passed in both the House and Senate and received an Outstanding Bill award.

Chad DuBois and Hannah Masingill were selected to attend the Council on National Affairs (CONA), which will take place in July at the YMCA Blue Ridge Assembly in Blue Ridge, North Carolina. Jack Starr was selected as an alternate for this program.

Elections were held for officers who will serve at the 2013 Youth Legislature Conference and, again, the Montgomery Catholic students were rather successful. In his first election, Paul Overton won his race and will serve as the Senate Floor Leader. In a highly contested election, Chad DuBois was elected to serve as the 2013 Alabama Youth Governor!

DuBois has been involved with every Youth in Government program the YMCA offers and has held numerous offices and duties within each of these programs. “I absolutely love Youth in Government. It has been a major part of my life for the past five years and I can honestly say from the people I have met to the experiences it has offered; I’m a different person because of it,” said DuBois.  Chad is the son of Mike and Cindy DuBois of Montgomery.

Pictured:  Montgomery Catholic’s Chad DuBois as he is sworn into office as the 2013 Alabama Youth Governor. (Photo by Sue Terino)