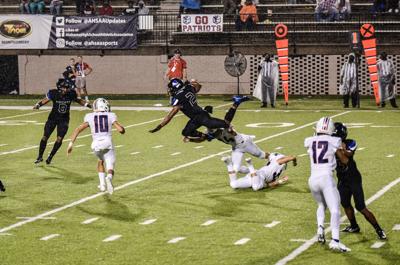 The strategy for any high school quarterback changes somewhat when he knows he has Myles Butler and DJ Carter lining up on opposite ends of the line.

“We like our chances against everybody,” Carter said. “In the huddle, when we know it’s a pass play, we tell him, ‘I’ve got this guy.’”

More often than not, Carter has proven to be right. The senior has 47 catches this season, averaging an astounding 23.5 yards per reception and four catches a game. His 1,104 receiving yards includes a team-best 14 touchdowns and that’s before you figure in his carries on jet sweeps and his yardage on kickoff returns.Carter used to line up in the backfield and return punts as well, but this season Catholic coach Aubrey Blackwell has attempted to lighten the burden on his big-play specialist a little by taking him off of punt returns and leaving him strictly at receiver.

“It’s freed him up to strictly concentrate on playing receiver and he’s made some big plays,” Blackwell said. “He’s been very versatile for us.”

Carter has 10 carries for 74 yards and a touchdown and nine kickoff returns for 279 yards – an average of 31 yards per return – but his ability to turn any reception into a touchdown makes him one of the most dangerous receivers in the state.

“It’s a lot less nerve-wracking, not having to do so much, but hopefully it allows me to get better at my normal position because I’m playing it a lot more and not having to move around as much,” Carter said. “Last year, it was more so trying to be good at everything, but now I’m not having to do as much I can be great at the little things.”

The Knights, like any team still alive in the playoffs, have honed their talents throughout the season, having to make up for a missed spring training session during the season. For Catholic, that means breaking in freshman quarterback Caleb McCreary and getting McCreary on the same page with his talented receivers.

“We had to be patient with him,” Carter said. “Ultimately, we can’t make him grow up any faster. He’s going to have his moments, but he’s still a kid, he’s still young. But we keep telling him, hey, you’ve got to grow up fast, we can’t let you stay a kid forever.”

The Knights (11-2) travel to Montgomery Academy (13-0) for the 3A semifinals on Friday, scene of the last loss by Catholic this season. Catholic has reeled off seven straight wins since losing to the Eagles 32-21 in late September.“We came out very flat,” Carter recalled. “We came out like we had already won the game. We came out super flat and they hit us in the mouth. We picked it up in the second half and got a lot of energy back but you’ve got to play like that for four quarters.

“We have a much better idea of how they’re going to play us compared to that first game. In the first game, we kind of had to guess because normally how teams would play other people is not how they play us because of the weapons we have on offense. They gave us a look we hadn’t seen before, we hadn’t prepared for. We made some adjustments at halftime, that’s why we picked it up in the second half. Now, we know how they’re going to play us so we’ve got a much better chance.”

For the past few weeks, Carter has been playing for his mother, a dedicated Catholic fan and team mother who has been hospitalized with an illness. With COVID restrictions in place at every medical facility, the senior generally has to rely on others to tell him about his mother’s improvement.

“I tell them to do their best to keep me updated on how she’s doing,” he said. “It really helps when you have as big a support cast behind you as I do.”

That support cast includes the coaches and everyone associated with Catholic football.

“She’s been watching the last three games from a hospital bed,” Blackwell said. “We’ve been constantly praying for her and the guys have lifted her up and are playing these games for her. She’s constantly involved in our program and is one of our moms that serves breakfast on Thursday mornings. It’s been nerve-wracking for DJ but he’s handled it very maturely. These last few games, he’s played them for her and it’s been humbling to watch.”

But he’s not alone. The Knights are averaging 38 points per game in the playoffs, playing their best football at the right time of the year.

“We’re on a roll right now, offensively and defensively,” Carter said. “On both sides of the ball we’re rocking with a lot of confidence and a team with confidence is scary.”