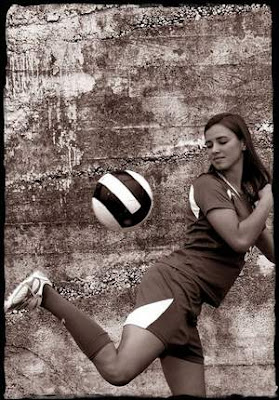 Allison Belsterling helped raise the standards for the Catholic girls’ soccer program during her career. As she set school records for scoring and led her team to its first two playoff victories, Belsterling became one of the area’s dominant players. The UAB signee is this year’s Montgomery Advertiser All-Metro girls soccer Player of the Year.

“That’s a nice way to go out,” Belsterling said. “It’s a good honor, and I’m glad to get it my senior year.” This is Belsterling’s fourth season as an All-Metro selection and second season as the Player of the Year. “I’m thrilled for her,” said Catholic head coach, and Allison’s father, Brian Belsterling. “She’s worked hard throughout her high school career. She’s practiced outside of practice and put in the extra work to become a shining player.”
Belsterling never reached the state tournament with Catholic, but she and her teammates took part in several Catholic firsts. As a freshman, Belsterling and the Knights reached the playoffs for the first time. During her junior season, Catholic hosted and won its first playoff game, 3-1 over UMS-Wright. The Knights lost to eventual state champion Altamont in the second round. This past season, Catholic again hosted in the first round before losing to Altamont in the second round. Altamont went on to win its second straight state title.
Belsterling finished her high school career with a Catholic record 144 goals. She set the Catholic season scoring mark as a sophomore with 44 goals. That same year, she set the single game record with six goals against St. James. As a senior, Belsterling scored 41 goals to lead Catholic to a 19-8-2 record and the second round of the playoffs.
“I had a pretty good season last year, but I was coming off a knee injury and it wasn’t my best,” Belsterling said. “This year, I felt like I stepped back up.” Coach Belsterling said there was a “noticeable difference” in his daughter’s play this season. “Her speed was better this year and her aggressiveness was up considerably this season,” Brian Belsterling said. “The mental aspect and getting her confidence back (after the injury) made a big difference.” Belsterling signed with UAB in February. “It’s exciting to know I’m going to be playing next year,” Belsterling said. “I’ve wanted to play college soccer since I was little. The main thing is I want to play hard and have fun. I want to contribute to the program and help us go far.”
Montgomery Catholic had several members of the Varsity Girls & Boys Soccer Teams named to the All-Metro Teams including at defenders Stephanie Cochrane and Anna Vercelli and at keeper Lauren Yates, all seniors. Named to the Boys’ All-Metro Soccer Teams were Colin Newmeyer as a forward, Troy Maxwell as a midfielder, and Matt Clarke was an honorable mention. Congratulations to all of our outstanding soccer players.
Pictured: Montgomery Advertiser’s All-Metro Girls Soccer Player of the Year, Montgomery Catholic’s Allison Belsterling. Photo by David Bundy