Catholic wins overtime thriller with MA, advances to 3A finals 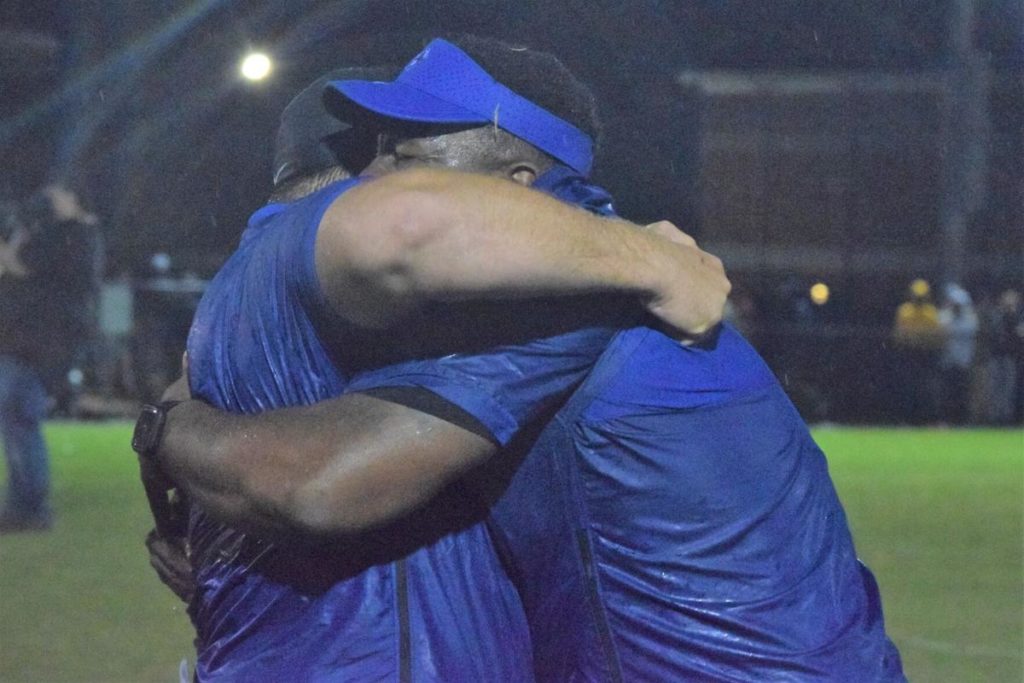 Catholic head coach Aubrey Blackwell hugs assistant head coach and defensive coordinator Kirk Johnson after the Knights defeated Montgomery Academy to advance to the 3A finals for the first time in school history.

The hot topic of conversation among sports fans in this state is the annual Iron Bowl clash on Saturday between Alabama and Auburn.

Unless you’re a Catholic fan, of course, in which case the only conversation is about the Knights’ first-ever trip to the Super 7 Championships at Bryant-Denny Stadium next week.

The Knights (12-2) cleared the final hurdle, taking a step into uncharted waters for a program that had only one semifinal appearance in school history before Friday night. Neither lightning nor a steady rain nor a determined Montgomery Academy team could keep the Knights from rallying from a seven-point deficit in the final five minutes to earn a 35-28 win in overtime at McLemore Field in the 3A semifinals.“Proud of our guys for doing something that people told me I could never do here,” Catholic coach Aubrey Blackwell said.

Catholic will face Fyffe (14-0), a team that had reached the 2A finals in five of the last six years, in the 3A championship game on Thursday at 10 a.m. at Bryant-Denny Stadium.

“It sunk in as soon as we got off that field in overtime,” said standout linebacker TJ Dudley. “I sat down and had to take it in for a moment. Because you always talk about it, about going to state every year, every team does. But once you get in that position to go and the opportunity is right in front of you, it’s shocking.”

Entertaining is a better word. In what was only the third semifinal meeting ever between two city programs, the Catholic-Montgomery Academy game lived up to the hype despite a lightning delay that pushed back the start of the game by 75 minutes, a steady downpour throughout the contest, and COVID restrictions that limited the sellout crowd to 1,200 fans.

“I knew it was going to be that way,” Catholic coach Aubrey Blackwell said. “All these kids out here (from both teams) had unbelievable years and played their tails off. That right there is what high school football is all about. It’s one of the best football games I’ve ever seen.”

It certainly featured a little of everything, with each coach reaching deep into his bag of tricks to counter the opposing coaches’ strategic schemes. When Catholic won the toss and chose the ball for overtime, Blackwell thought back to all those late-in-the-week practice sessions that had practiced for just this moment. There were plays designed to run behind linebacker-turned-H-backs Dudley and Pat Ryan and pass plays out of varying formations.

Then he scrapped it all and went with what was hot in the fourth quarter. Tailback Jeremiah Cobb ran left for seven yards on the stretch play, then broke up the middle almost untouched on the next play for the final three yards and a 35-28 lead.

Of course, Blackwell didn’t know which plays he would need for the next overtime period, which had to be in the back of his mind as Jashawn Cooper rumbled for six yards on Montgomery Academy’s first overtime possession from the 10-yard line.

An illegal procedure penalty on the next play, however, stopped the Eagles dead in their tracks. Cooper ran for no gain, Britton Kohn’s third-down pass was inches short of Jackson Kelly in the end zone, and Kohn’s fourth-down pass for Kelly was intercepted by Ryan to send the Knights to Tuscaloosa.

“Our guys played relentlessly, they’ve done that all year,” Blackwell said. “Those guys (Ryan and Dudley) did what we expected them to do and that was to make plays for us. They played a great game and what a great play by Pat. We were screaming that they had done it earlier on the fourth down and eight and I didn’t think he would see it, but he sure did. Went right to it and what a great job of paying attention to the game.” Catholic had the upper hand for much of the game, thanks to a defensive effort that held Cooper to 92 yards on 23 carries, while his older brother Jamal had 11 yards on seven carries and Kohn had 30 yards on 12 carries.

“We switched a lot of things up from the first time we played them and I honestly felt like we underestimated them a little bit last time,” said Dudley, who had 10 tackles and a crucial pass breakup on defense. “When we came back out this time, the team knew what we had to do to win the game.”

In the first meeting, a Montgomery Academy win in late September on the same field, the Eagles ran their way to victory while their defense held Catholic in check. On Friday night, Montgomery Academy was forced to go to the air while Catholic churned out more impressive runs with Cobb getting 109 yards on 21 carries.

Catholic used five consecutive runs by Cobb to set up a 31-yard touchdown pass from Caleb McCreary to Johnathan Rhoden for the first points of the game late in the first quarter. The Knights got two more touchdowns out of short Dudley runs from Wildcat formation in the third quarter.

Montgomery Academy, meanwhile, tied the game at 7-7 late in the second quarter on a 37-yard halfback pass from Jamal Cooper to Alex Kohn and again at 21-21 with a 70-yard pass from Britton Kohn to Chance Wilson and a 39-yard pass from Kohn to Jamal Cooper with 7:10 remaining.

“We’ve been hiding our passing all year,” MA coach Robert Johnson said. “If you look at the last couple of games, we’ve caught the ball really, really well. We knew we’d have to use it.”

“We were worried about it, too,” Blackwell noted. “When they started motioning both (Cooper) guys out of the box, they presented something we hadn’t seen before. Kohn is one heck of a football player and made some plays for them and some big-time throws tonight, too.”

Catholic’s next drive lasted just three plays. On third and seven, McCreary threw over the middle but Jashawn Cooper was there for the interception and 19-yard return to the Catholic 16. Four plays later, Jashawn Cooper crashed over for the touchdown and suddenly MA had the upper hand with 4:13 remaining.

Despite the offensive breakdown, Blackwell was quick with words of encouragement for his freshman quarterback.

“I’m used to having senior quarterbacks and he’s a freshman,” Blackwell said. “And if I would have gotten mad or gotten upset with him … we needed him on those last two drives. I’ve learned with Caleb just stay positive with him and he’ll make things happen for you.”

“At the beginning of the season, when he threw a pick, he would get down on himself,” Dudley said. “Now, he hasn’t thrown one in a while but when he did, he shook it off and was ready for the next possession when we got the ball.”

McCreary came out firing, hitting DJ Carter for 19 yards on the right sideline, coming back left for 15 yards to Justin Rose, then flipping a pass in the left flat for Cobb, who turned it into a 51-yard sprint for the end zone with 2:30 remaining.

Britton Kohn started the ensuing drive with an 18-yard pass to Carter Wallis, but when he looked for Wallis a little over a minute later, his pass hung in the air and LJ Green intercepted to force overtime and, ultimately, end Montgomery Academy’s remarkable season at 13-1.

“It was a heck of a season,” Johnson said. “I love these guys and these coaches. We played our hearts out, both teams did, and we just came up a play or two short.”