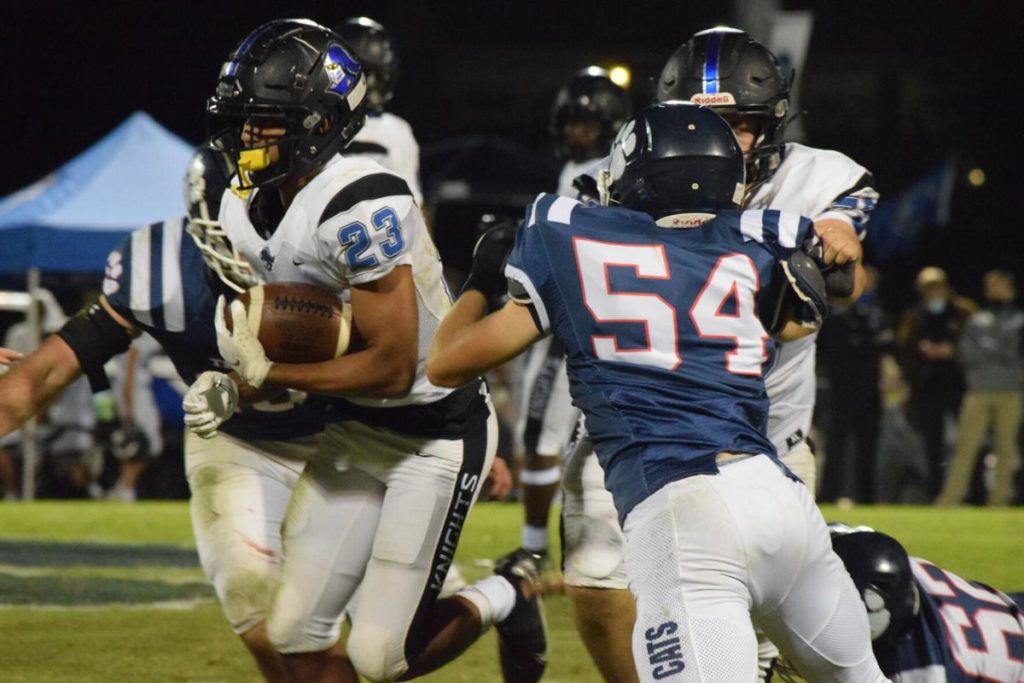 To win the 3A Region 4 title, both Trinity and Catholic knew every inch would be contested, opportunities would be rare and the team that made the fewest mistakes would likely win the battle.

Catholic made the most of three Trinity turnovers, cashing in two of them for touchdowns and sealing the win with the third as the Knights won the first back-to-back region titles in school history with a 13-10 victory at Ragsdale-Boykin Field on Friday night.

Since the Alabama High School Athletic Association switched from areas to regions in 2000, Catholic has won just three region titles and all have come in the last four years under a group of seniors that turned the program around from a perennial doormat to a team that expected to win.“We absolutely love it,” Catholic senior defensive lineman Marcus Dees said. “We want to keep it and make that a part of our culture here.”

The Knights (7-2) improved to 6-0 in region play with a game remaining at Goshen next week before hosting the first round of the 3A state playoffs at home on Nov. 6 against a Region 1 opponent. They won Friday’s game despite a rushing attack that rarely found any daylight against the Trinity defense and despite 123 yards in penalties.

“We had a lot of times where we just shot our toes off, we had so many penalties and little mistakes that stopped us from finishing drives and put us behind the chains,” Catholic coach Aubrey Blackwell said. “We knew this game was going to be like this. Trinity is a really good football team. Their defense is so tough and their kids play really hard. We didn’t give up, the kids kept finding a way to fight and win and I’m just really proud of their unbelievable effort tonight.”

A scoreless first half would turn on the play of an unlikely hero as sophomore defender LJ Green read John David Bonner’s eyes, stepped in front of a pass for Dawson Criswell and sprinted 36 yards with the interception for a touchdown with 2:30 remaining in the first half.

“He knew it was coming,” Blackwell said. “He practiced that route a bunch all week and he did a great job of making a play in a big situation. That was huge for a sophomore in his first year of playing football.”

Dees called the play “a great momentum boost for us.

“What’s crazy is we had to talk to him to get him out here because he’s a basketball player. He stepped up for us tonight.” Callan Gadilhe’s extra-point attempt was blocked by Jay Tymes, leaving the score at 6-0.

Trinity put together a 12-play drive on its initial possession of the second half to cut the lead in half on a 36-yard field goal by Grayden Flowers, but the Wildcats were in dire need of a turnover, generating just 14 rushing yards and 128 total yards through the first three quarters.

But it was Catholic that would generate the next break. Bonner was pressured by a trio of defenders that forced a bad throw and Patrick Ryan was there for the Knights’ second interception of the night. His nine-yard return set up Catholic at the Trinity 27 and Jeremiah Cobb, who finished with 89 yards on 23 carries, ran 16 yards on first down, then carried the final yard six plays later for a 13-3 lead.

Trinity would score on a 2-yard run by Walton Cherry with 3:23 remaining, but the Knights ran most of the time off of the clock before punting back with 47.8 seconds left. Bonner’s first-down pass to William Roberson covered 14 yards but his next attempt, as he rolled right under pressure, was intercepted by Johnathan Rhoden.

“We knew that we couldn’t give up big plays and we did,” Trinity coach Granger Shook said. “We knew that we couldn’t give them extra opportunities and we turned the ball over way too many times. Two turnovers turned into two touchdowns. That was the difference in the game. But I was proud of the way our kids continued to compete. Watching film on this game last year, our kids laid down. This year, they did not. They scratched and clawed and got back in the game and expected to win.”

Catholic, which had allowed just 63 total yards in the first half, gave up twice that (134) in the second half but made the stops when it counted.

“I learned that through anything we can prevail, we can fight through it as long as we put our heart to it and our mind to it and fight for what we believe in,” Dees said. “We knew it was going to be a dogfight from the beginning but that we would come out on top as long as we kept applying the pressure and make sure our (offensive) guys had time to recuperate.”

With the win, Catholic extended it region winning streak to 12 and has won 21 of its last 22 region games dating back to a 2017 loss to Trinity. The Wildcats (6-2) dropped to 5-1 in region play with a region game at Childersburg next week followed by a home game with St. James on Oct. 30 before hosting the first round of the 3A playoffs on Nov. 6.