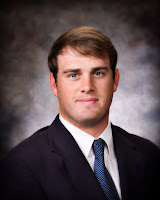 The future of the Montgomery Catholic baseball program has been placed in the able hands of new head coach Brad Parker and two new assistant coaches.

Parker, a 2004 Montgomery Catholic graduate and an assistant coach for the Knights last season, will be joined on the staff by Barcy Spigner, who will serve as assistant head coach, and by former University of Alabama baseball player Wes Henderson.
“I’ve been a part of the Catholic community for a long time, as a player and as a coach, and I am grateful for this opportunity,” Parker said.
“I want to bring excitement back into the program.  Our coaching staff is ready to hit the ground running with Barcy and Wes who bring a wealth of baseball knowledge, experience, and love for game.
“We have a great group of kids with a lot of potential and I look forward to working with these young men in building a strong, competitive baseball program,” he said.
Parker is a 2010 graduate of the University of Alabama with a degree in Kinesiology. While at , he spent considerable time working with Crimson Tide athletes in their strength and conditioning program.
In addition to leading the baseball program, he will continue to serve as an assistant coach in the Montgomery Catholic football program and will also work daily with the school’s overall strength and conditioning program during the athletic physical education period.
“I am thrilled with this new baseball coaching staff,” said Anne Ceasar, President of Montgomery Catholic. “They bring many rich and varied experiences to the program.
“I believe that under the leadership of Coach Parker, Coach Spigner and Coach Henderson, Montgomery Catholic baseball will steadily improve to a higher level.”

Spigner, who played collegiately at , is a successful longtime coach in city baseball leagues in . Henderson, a native of , was a first baseman-DH for the Crimson Tide from 2004-2009. He will also teach high school history and assist in the basketball program.

The staff has already met to begin rebuilding the Knights’ baseball program. A team meeting with players is scheduled for July 18 in the Pope John Paul II Field House.