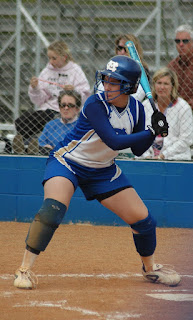 by David Mundee
The Dothan Eagle
HEADLAND — Catholic of Montgomery coach Bill Barranco describes Abby Beesley as an impact player. She certainly lived up to the billing Tuesday. The senior earned two pitching wins and went 6-for-7 on offense, including a game-ending RBI single, to pace the Lady Knights to a 5-3, 5-4 sweep of Headland in a Class 3A first-round sub-state series at Salter Field.
Catholic advances to the second round of sub-state for the first time since 2005.

“It was a great team effort, led by our two seniors, Abby Beesley and Olivia Veres,” Barranco said. “Even in the middle of the lineup, we had people that were hitting, so up and down it was a great team effort.” Headland’s season ended at 25-7 with two nightmarish performances. The Lady Rams had nine errors in the two games and had pitchers walk eight and hit two batters. “That was not us at all,” Headland head coach Lynn Faulk said. “We didn’t hit the ball the first game and we made too many errors. We had gone four games without an error then we made four in that first game (and five in second game). That is not us. “I hate the girls had to go out like this. They worked hard and overcame a lot. It is just tough for them.” Faulk added, “It was just a bad day to have a bad day. We had our chances, but didn’t do it. Then their best hitter got up and did what she was supposed to do.”
That “best hitter” was Beesley, who clinched the sweep with a game-winning two-out, run-scoring single in the bottom of the seventh. The hit capped a 4-for-4 second-game performance with a RBI for Beesley. She also had a walk. In the opener, she was 2-for-3 with a sacrifice fly and two RBIs. Beesley was also sharp on the mound in the opener, pitching a perfect game for six innings before Headland earned three runs and four hits in the final inning. “She’s just a great impact player,” Barranco said. “Whenever she is at bat, everybody is confident, and when she is on the mound, everybody is confident. She is just everything a coach could ask for.”
In the second game, Headland tied it in the top of the seventh. Candace Murry hit a bouncer through the shortstop hole for a two-out, run-scoring single, bringing in Shayla Reeves, who singled to open the inning. Murry moved to second on a wild pitch, but a flyout to the shortstop ended the inning. Catholic’s half of the seventh started with consecutive singles by Emily Ellis, Kelsey Williamson and Caitlyn Wiggins that loaded the bases. Headland pitcher Megan Gay then got two straight strikeouts, the first one after coming back from a 3-1 count.
However, Beesley slapped the first pitch for a single past the second baseman, bringing home Ellis for the game-winning run. The Lady Rams built a 2-0 lead by the third. In the first inning, Lacey Wiggins and Murry singled. The throw back in after Murry’s single was a bad one, allowing Wiggins to score. Two innings later, Murry doubled home Kalie Jones, who reached on an infield single. Catholic tied it with two runs in the third, cashing on three Lady Ram errors then Headland edged back in front in the sixth when Morgan Blankenship scored during an errant pick-off attempt at third.
The Lady Knights scored twice in the sixth to go up 4-3. Beesley had a single to left and the ball got past the outfielder, allowing Jessica Barranco to score from first. Beesley later scored on an infield error on a slap hit attempt to the shortstop area. Beesley scattered 10 hits and struck out three on the mound. Headland’s offense was led by Murry with three hits. Wiggins and Gay had two each.
In the opener, Catholic broke a scoreless tie with a run in the fifth and four in the sixth for a 5-0 lead. Beesley ripped a RBI single off the body of pitcher Lacey Wiggins in the fifth.
In the sixth, Catholic’s Wiggins singled in a run. A bases-loaded walk to Kelsey Donohue, a bases-loaded hit by a pitch to Barranco and a Beesley sacrifice fly scored the other runs.
Headland scored three in the seventh off a two-run single by Murry and a RBI single by Blankenship. With the tying runner at the plate, Beesley got a ground out and flyout in the infield to end the game. Beesley and Wiggins had two hits each for Catholic.
The Lady Knights will host the “best of 3” Sub-State series on Saturday, May 12th with the 1st game @ 11:00 am vs. Mobile Christian.