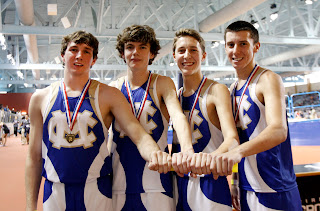 Montgomery Catholic Preparatory School’s Skip Martin claimed the Class 1A-4A State Championship in the 1600-meter run on Saturday, finishing with a time of 4:34.38 at the Alabama State Indoor Track and Field Championships in Birmingham.

The time by Martin was just three seconds off of the state record which was set in 2003, and earned the team 10 total points on the day.

Wright and fellow senior Wellington Westendorf each made the medal stand as well for the Knights; with Wright finishing as the state runner-up in the 800-meters on Friday night and Westendorf third in the shot put.

Several other Knights have shined in the indoor championships, which is still on going in Birmingham, setting school records and finishing in the top 10 in their event.

Jennifer Westendorf finished in the top 10 in both the high jump and long jump for the Knights, while the boy’s 4×400-meter relay team capped off the weekend with a sixth place finish and a new school record.