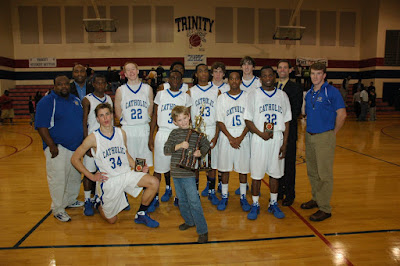 by Wesley Lyle, The Montgomery Advertiser

Two losses have been bothering the Catholic Knights this season. As Catholic rolled to 10 wins in its first 14 games, a pair of losses to St. Jude still stung.
Those losses don’t hurt quite as much after an 86-44 win over the Pirates Tuesday night in the Capital City Conference Christmas Tournament championship. The 42-point win is the largest margin of victory in the 14-year history of the tournament.
“This felt good,” Catholic sophomore Kenny Davison said. “We wanted to shock people and show who was the best team in the Capital City Conference. We’re excited right now and I’m ready to go celebrate with my team.” After losing 48-47 in overtime in November and 54-44 earlier this month, Catholic took no chances this time.
“Those losses left a bad taste in our mouth,” Catholic coach Ken Klinger said. “We didn’t want to lose three times to one team.”
Catholic (11-5) set the tone early, building a 16-5 lead in the first quarter and 34-15 at the half. St. Jude (6-7) was held to five points in the first quarter and nine points in the fourth.
“In the Elmore County game, we had a similar start,” Klinger said of the Knight’s 65-57 semifinal win on Monday. “But in the second half, we started playing not to lose instead of playing to win.
“At halftime tonight, I told the guys to play like we’re down by 20. We played to win tonight and that made the difference.”
Davison, the tournament MVP, led Catholic with a career-high 30 points.
“Kenny was due for a big game,” Klinger said. “He’s led us in scoring this year, but he really hasn’t had a great shooting night. He was on tonight. When he’s on, he’s hard to stop.”
Butler Parker added 18 points for Catholic. Taylor Belsterling grabbed 13 rebounds and Landon Pickens had 12 boards.
“This could be a big momentum shift for us going into January,” Davison said. “We came into this game with a lot of intensity and we want to keep it up.” After a trip to Georgiana on January 2, the Knights travel to Montgomery Academy on Tuesday, January 6th. 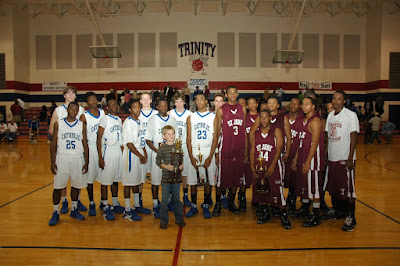