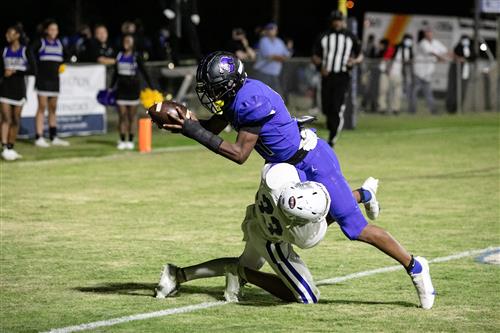 Welcome to the postseason.

After missing the last two weeks with an injured left wrist, Catholic’s Myles Butler had a rough start to Friday’s first-round game with Bayside Academy.

He put a move on a defender to get open on a curl pattern and dropped the first pass from Caleb McCreary. The second attempt was even worse, bouncing up in the air off of his hands where only fate and a fast-reacting teammate kept it from being intercepted and possibly returned for a touchdown.“It’s not even fully healed yet,” Butler said of his left wrist. “It’s still a little broken but no excuses. I had a lot of nerves going, worrying about me getting hit on it and was it going to be the same. So I did drop two passes, but I had to face the adversity and bounce back from it. That’s what this game teaches, how you’re going to overcome adversity. I came back strong with three TDs and helped my team with a ‘dub.’”

Butler settled in after the shaky start, catching the next three passes for touchdowns to lead the big-play Knights to a surprisingly easy 52-21 rout of the Admirals in the first round of the 3A playoffs.

Catholic (9-2) remains home and plays Opp (8-3) in a second-round game next Friday. Bayside Academy ends the season at 8-3.

“Bayside’s a good team,” Catholic coach Aubrey Blackwell said. “We made some really big plays tonight. I’m loving how our kids are jelling. It’s just a tribute to how we made big plays tonight and had a lot of good breaks go our way early in this game.”

Butler was the reason for many of the early breaks. The senior sprinted down the left sideline on the Knights’ next possession and gathered in McCreary’s pass on the Bayside 40 and continued untouched into the end zone to complete a 68-yard play for a 7-0 lead. The next pass toward Butler was underthrown and broken up by Bayside’s Steadman Jones, but after a Jones’ fumble on the final play of the first quarter gave the ball back to the Knights, Catholic lined up with three wideouts on the right side of the field and threw to the receiver (Butler) on the left side for a 15-yard touchdown and a 14-0 lead.

After Bayside got on the scoreboard with an 81-yard pass to running back Jeremy Loper, McCreary threw a 21-yard touchdown pass to DJ Carter, then hit Butler with another pass at the 1, and the senior dove into the end zone for his third scoring reception and a 28-7 lead as the rout was on.

“Just like we’ve told him before, we’re going to be confident in him,” Blackwell said. “He’s carried us a bunch and we’re going to continue to feed him the ball regardless of the first couple of bad plays. Just because a guy drops a couple of passes, I’m not going to quit on him.”

If the Admirals had any hopes of rallying, Kylon Griffin put the exclamation point on the rout, countering an 18-yard touchdown pass from Zach Kittrell to John Luke Warner with 49 seconds remaining in the first half by returning the ensuing kickoff 74 yards to set up Judd Osten’s 39-yard field goal for a 31-14 lead.

The Catholic junior followed that highlight with an 86-yard kickoff return for a touchdown to open the second half and added a pick-six that took the points off the scoreboard with a penalty, but still set up a 10-yard touchdown run by Jeremiah Cobb for a 45-14 lead.

“ ’Three’ came in with a kick return back, a pick-six back,” Butler said. “That’s D-I football. He’s a Power Five cornerback and that’s the way he’s going to play.”

Butler has made a habit of making those types of plays as well. Two targets resulted in drops but the next three went for 103 yards and three touchdowns. Butler wasn’t sure what to expect when he took the field for Friday’s game but he left with a smile and a sense of accomplishment.

“There were a lot of questions,” Butler said. “Can I make contact? Can I block? But all those questions got answered tonight and it showed me I can play my ball just like I’ve been playing, with this wrist like this.”